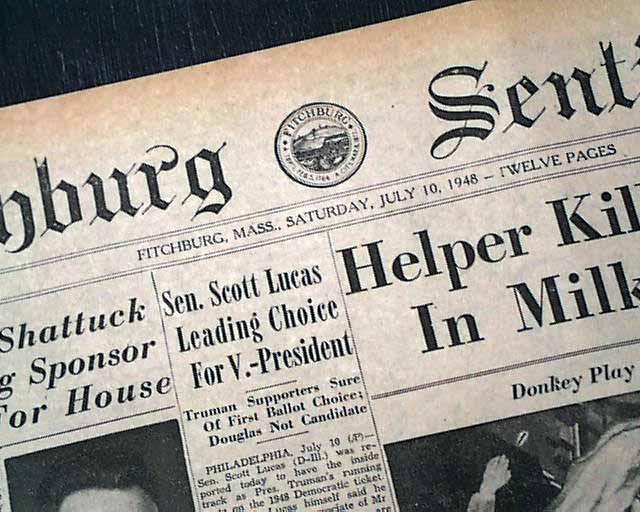 This 12 page newspaper has a one column headline on page 8:

This was Satchel Paige's very 1st appearance in the Major Leagues. (age 42)

wikipedia notes: On July 9, 1948, Paige became the oldest man ever to debut in the major leagues, at the age of 42 years and two days. With the St. Louis Browns beating the Indians 4–1 in the bottom of the fourth inning, Boudreau pulled his starting pitcher, Bob Lemon, and sent Paige in. Paige, not knowing the signs and not wanting to cross his catcher up, did not put too much on his first pitch, which Chuck Stevens lined for a single into left field. Jerry Priddy bunted Stevens over to second. Up next was Whitey Platt, and Paige had had enough. He threw an overhand server for a strike and one sidearm for another strike. Paige then threw his Hesitation Pitch which put Platt in such a funk that he threw his bat forty feet up the third base line. Browns manager Zack Taylor bolted from the dugout to talk to umpire Bill McGowan about the pitch, claiming it was a balk, but McGowan let it stand as a strike. Paige then got Al Zarilla to fly out to end the inning. The next inning, he gave up a leadoff single, but with his catcher having simplified his signals, Paige got the next batter to hit into a double play, followed by a pop fly. Larry Doby pinch hit for Paige the following inning.