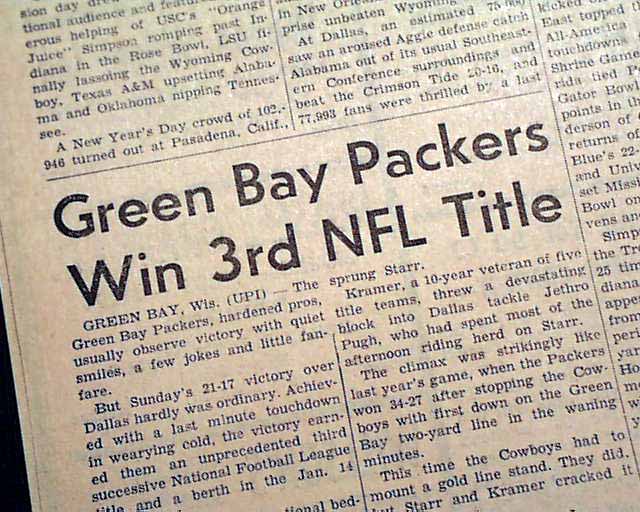 This 6 page newspaper has a two column headline on page 4: "Green Bay Packers Win 3rd NFL Title" with smaller subheads. Tells of the Packers winning their 3rd straight NFL championship and a bid to go to Super Bowl II against the AFL champions.

Other news of the day. Some spine wear, otherwise good.

wikipedia notes: The Packers advanced to the NFL Championship game and faced the Dallas Cowboys in the NFL Championship Game. The game was played on December 31, 1967 at Lambeau Field in Green Bay, Wisconsin. The official game-time temperature was -13°F / -25°C, with a wind chill around -48°F / -44°C. The bitter cold overwhelmed Lambeau Field's new turf heating system, leaving the playing surface hard as a rock and nearly as smooth as ice. The officials were unable to use their whistles after the opening kickoff when a whistle stuck to a referee's lips.

Early in the game, the Packers jumped to a 14-0 lead with a pair of touchdown passes from Bart Starr to wide receiver Boyd Dowler. Green Bay committed two costly turnovers in the second quarter that led to ten Dallas points. Neither team was able to score any points in the third quarter, but then on the first play of the final period, the Cowboys took a 17-14 lead with running back Dan Reeves' 50-yard touchdown pass to wide receiver Lance Rentzel on a halfback option play.

Starting from his own 32-yard line with 4:54 left in the game, Starr led his team down the field to the one yard line. Running back Donny Anderson attempted two runs into the end zone, but fell short. Facing a third down with sixteen seconds left in the game, Starr executed a quarterback sneak behind center Ken Bowman and guard Jerry Kramer's block through defensive tackle Jethro Pugh, scoring a touchdown that gave the Packers a 21-17 win and their unprecedented third consecutive NFL championship.