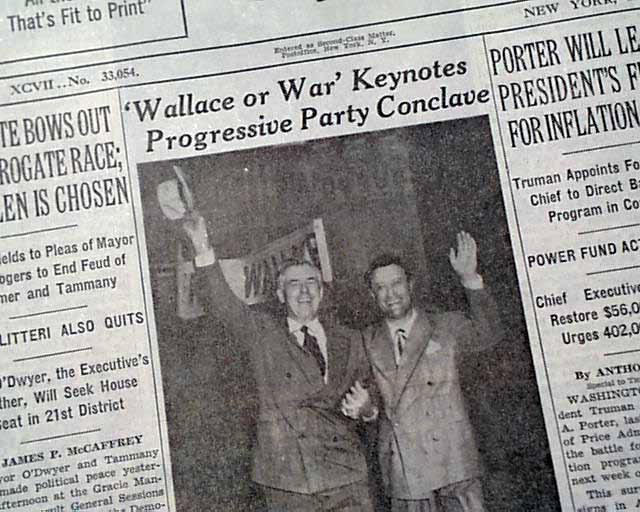 This 28 page newspaper has two column headlines on the front page that include: "'Wallace or War' Keynotes Progressive Party Conclave" and more with related photo. More related material on page 6.

Tells of the nomination of Henry A. Wallace for the Progressive Party candidate for President of the United States of America.

wikipedia notes: Wallace left his editorship position in 1948 to make an unsuccessful run as a Progressive Party candidate in the 1948 U.S. presidential election. His platform advocated friendly relations with the Soviet Union, an end to the nascent Cold War, an end to segregation, full voting rights for blacks, and universal government health insurance. His campaign was unusual for his time in that it included African American candidates campaigning alongside white candidates in the American South, and that during the campaign he refused to appear before segregated audiences or eat or stay in segregated establishments.

As a further sign of the times, he was noted by Time as ostentatiously riding through various cities and towns in the South "with his Negro secretary beside him." Many eggs and tomatoes were hurled at and struck him and his campaign members during the tour, while at the same time President Truman referred to such behavior towards Wallace as very un-American. Wallace was quoted as saying, "There is a long chain that links unknown young hoodlums in North Carolina or Alabama with men in finely tailored business suits in the great financial centers of New York or Boston, men who make a dollars-&-cents profit by setting race against race in the far away South." State authorities in Virginia sidestepped enforcing its own segregation laws by declaring Wallace's gatherings as private parties.

The "Dear Guru" letters reappeared now and were published, seriously hampering his campaign. Even more damage was done to Wallace's campaign when several prominent journalists, including H.L. Mencken and Dorothy Thompson, publicly charged that Wallace and the Progressives were under the covert control of Communists. Wallace was endorsed by the Communist Party (USA), and his subsequent refusal to publicly disavow any Communist support cost him the backing of many anti-Communist liberals and socialists, such as Norman Thomas. Christopher Andrew, a University of Cambridge historian working with evidence in the famed Mitrokhin Archive, has stated publicly that he believed Wallace was a confirmed KGB agent. Students in Eastern Europe were made to demonstrate in support of Wallace, chanting "long live Wallace, death to Truman."

Wallace suffered a decisive defeat in the election, to the Democratic incumbent Harry S. Truman. Gaining 2.4% of the popular vote, he ended up third runner-up behind Republican Thomas Edmund Dewey and Dixiecrat Strom Thurmond, but virtually tied with Thurmond. He did not carry any states.