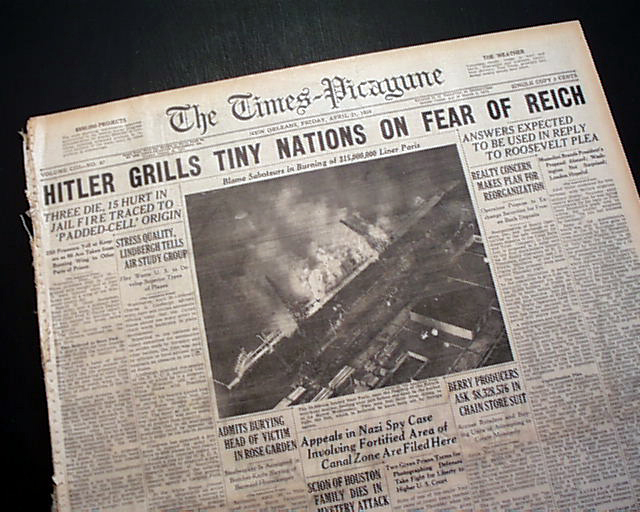 This 40 page newspaper has opening game reporting from Yankee Stadium in the 1939 baseball season.

Page 21 has a five column headline: "Yanks Open With 2-0 Victory Over Red Sox" with subheads.

This was also the game Ted Williams had his 1st career hit. Unfortunately not mentioned in the text but can be seen in the box scores. (see)

Other news of the day throughout. Light browning with little spine wear, otherwise in nice condition.

wikipedia notes: Theodore Samuel "Ted" Williams (August 30, 1918–July 5, 2002) also nicknamed The Kid, the Splendid Splinter, Teddy Ballgame and The Thumper, was a left fielder in Major League Baseball. He played 21 seasons, twice interrupted by military service as a Marine Corps pilot, with the Boston Red Sox. He is widely considered to be one of the greatest hitters in the history of baseball.

Williams was a two-time American League Most Valuable Player (MVP) winner, led the league in batting six times, and won the Triple Crown twice. He had a career batting average of .344, with 521 home runs, and was inducted into the Baseball Hall of Fame in 1966. He is the last player in Major League Baseball to bat over .400 in a single season (.406 in 1941). Williams holds the highest career batting average of anyone with 500 or more home runs. His career year was 1941, when he hit .406 with 37 HR, 120 RBI, and 135 runs scored. His .551 on base percentage set a record that stood for 61 years. An avid sport fisherman, he hosted a television show about fishing and was inducted into the IGFA Fishing Hall of Fame.