Home > Back to Search Results > University of Marshall football...
Click image to enlarge 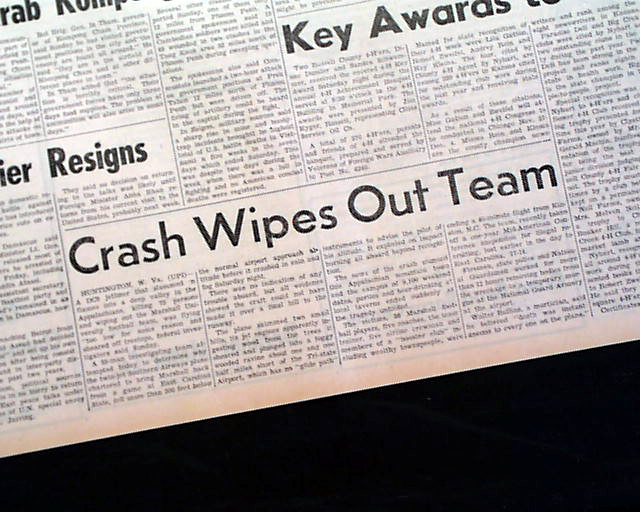 This 6 page newspaper has a four column headline at the bottom of the front page: "Crash Wipes Out Team"

Tells of the University of Marshall football team that crashed in West Virginia via airplane.

wikipedia notes: Southern Airways Flight 932 was a chartered Southern Airways DC-9 commercial jet flight from Stallings Field (ISO) in Kinston, North Carolina to the Huntington-Tri-State/Milton Airport (HTS) in Ceredo, West Virginia. At 7:35 pm on November 14, 1970, the aircraft crashed into a hill just short of the Tri-State Airport, killing all 75 people on board.[1] The plane was carrying 37 members of the Marshall University Thundering Herd football squad, eight members of the coaching staff, 25 boosters, four flight crew members, and one employee of the charter company. The team was returning home after a 17–14 loss against the East Carolina University Pirates (now their conference rivals) at Ficklen Stadium in Greenville, North Carolina.[2] At the time, Marshall University's athletic teams rarely traveled by plane, with most away games within easy driving distance of the Huntington, West Virginia campus. The team had originally planned to cancel the flight, but changed plans and chartered the Southern Airways DC-9.