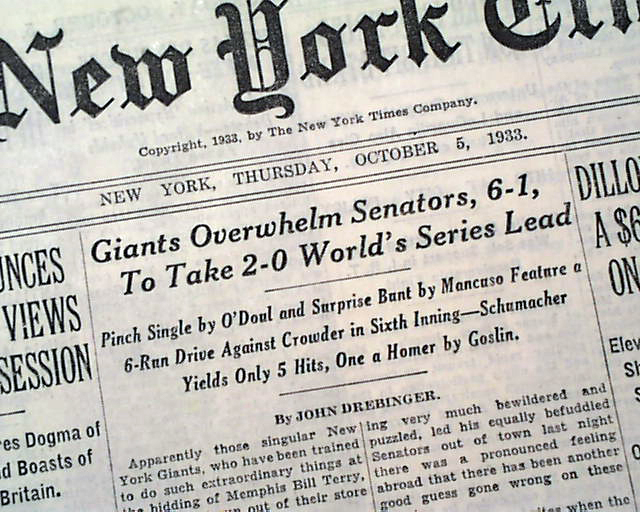 This 46 page newspaper has two column headlines on the front page that include: "Giants Overwhelm Senators, 6-1, To Take 2-0 World's Series Lead" and more. (see)

Much more on pages 26 & 27 with photos and box scores. (see) Nice to have in a New York City newspaper.

wikipedia notes: The 1933 World Series featured the New York Giants and the Washington Senators, with the Giants winning in five games for their first championship since 1922, and their fourth overall.

With John McGraw having retired in 1932, the New York Giants regular first baseman Bill Terry had assumed the managing duties. Walter Johnson also retired in 1932 and the Senators had regular shortstop Joe Cronin taking over as manager also. (McGraw watched the Series from the stands and died four months later.)

Washington, D.C. has not hosted another World Series since 1933. Game 5 was the final Series game played in the nation's capital as of 2008. This Washington Senators franchise became the Minnesota Twins during the 1960–1961 offseason, and would not reach the World Series again until 1965. The second Senators team became the Texas Rangers. The transfer of the Montreal Expos to become the Washington Nationals opens the door to D.C. again potentially.