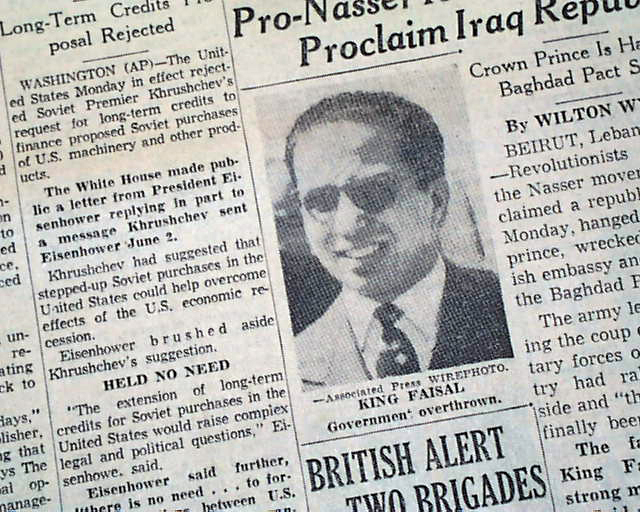 This 44 page newspaper has a three column headline on the front page: "U.N. MEETING TODAY ON MIDEAST CRISIS" with subheads, map and related photos. (see)

wikipedia notes: The dispatching of Iraqi army units to Jordan played into the hands of two of the key members of the Iraqi Free Officers movement: Colonel Abdul Salam Arif and the movement’s leader, Brigadier General Abdul Karim Qasim. The Iraqi 19th and 20th Brigades (the former under the command of Qasim and the latter featuring Arif’s battalion) were dispatched to march to Jordan, along a route that passed Baghdad. The opportunity for a coup was thus presented to, and seized upon, by the conspirators. Arif was to march on Baghdad with the 20th Brigade-which he had seized control of with the help of Colonel Abd al-Latif al-Darraji- while Qasim would remain in reserve with the 19th at Jalawla. In the early hours of July 14 1958, Arif seized control of Baghdad’s broadcasting station (which was to become his H.Q.) and broadcast the first announcement of the revolution by radio. Arif “…denounced imperialism and the clique in office; proclaimed a new republic and the end of the old regime…announced a temporary sovereignty council of three members to assume the duties of the presidency; and promised a future election for a new president.” Arif then despatched two detachments from his regiment; one to al-Rahab Palace to deal with King Faisal and the crown prince, the other to Nuri al-Said’s residence. Despite the presence of the crack Royal Guard at the Palace, no resistance was offered by order of the crown prince. It is uncertain what orders were given to the palace detachment, and what level of force they detailed. However, at approximately 08.00am, the King, crown prince and the other members of the Iraqi Royal Family were executed as they were leaving the palace. With their demise, the Iraqi Hashemite dynasty ended. Meanwhile, Said was able to temporarily slip the net of his would-be captors, by escaping across the Tigris after being alerted by the sound of gunfire.

By noon, Qasim had arrived in Baghdad with his forces and set up headquarters in the Ministry of Defence building. The conspirator’s attention now shifted towards locating al-Said, lest he escape and undermine the coup’s early success. A reward of 10,000 Iraqi dinar was offered for his capture[15], and a large scale search began. On July 15 he was spotted in a street in the al-Battawin quarter of Baghdad attempting to escape disguised in a woman’s abaya. Said and his accomplice were both shot, and his body was buried in the cemetery at Bab al-Mu’azzam later that evening.

Mob violence was to continue even in the wake of Said’s death. Spurred by Arif’s urges to liquidate traitors, uncontrollable mobs took to the streets of Baghdad. The body of 'Abd al-Ilah was taken from the palace, mutilated and dragged through the streets, finally being hung outside the Ministry of Defence. Several foreign nationals (including Jordanian and American citizens) staying at the Baghdad Hotel were killed by the mob. Mass mob violence didn’t begin to die down until Qasim imposed a curfew, yet this did not prevent the disinterment, mutilation and parading of Said’s corpse through the streets of Baghdad the day after its burial.

In the wake of the successful coup, the new Iraqi Republic was to be headed by a Revolutionary Council. At its head was a three man sovereignty council, composed of members of Iraq’s three main communal/ethnic groups. Muhammad Mahdi Kubbah represented the Shi’a population; Khalid al-Naqshabandi the Kurds; and Najib al Rubay’i the Sunni population. This tripartite was to assume the role of the Presidency. A cabinet was created, composed of a broad spectrum of Iraqi political movements: this included two National Democratic Party representatives, one member of al-Istiqlal, one Ba’ath representative and one Marxist[21].

Thirteen days after the revolution, a temporary constitution was announced, pending a permanent organic law to be promulgated after a free referendum. According to the document, Iraq was a republic and a part of the Arab nation whilst the official state religion was listed as Islam. Powers of legislation were vested in the Council of Ministers, with the approval of the Sovereignty Council, whilst executive function was also vested in the Council of Ministers.