Home > Back to Search Results > Golfer Bobby Jones in 1930...
Click image to enlarge 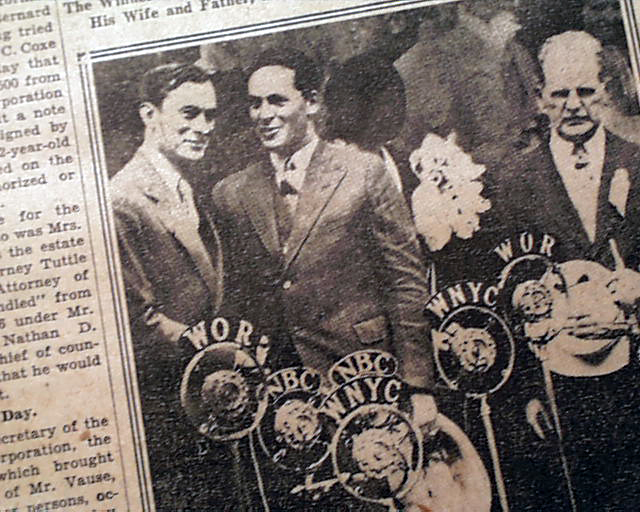 Much more on page 3 with related photos. Nice to have this in a New York City newspaper.

Other news of the day throughout. Unfortunately this issue has some damage at the top portion of the front page as you can see in the photos. The Bobby Jones material though is unhurt by this. Usual browning with some margin wear.

source: wikipedia: Jones was not only a consummately skilled golfer, but he also exemplified the principles of sportsmanship and fair play. Early in his amateur career, he was in the final playoff of the 1925 U.S. Open at the Worcester Country Club. During the match, his ball ended up in the rough just off the fairway, and as he was setting up to play his shot his iron caused a slight movement of the ball. He immediately got angry with himself, turned to the marshals, and called a penalty on himself. The marshals discussed among themselves and questioned some of the gallery if anyone had seen Jones' ball move. Their decision was that neither they nor anyone else had witnessed any incident, so the decision was left to Jones. Bobby Jones called the two-stroke penalty on himself, not knowing that he would lose the tournament by one stroke. When he was praised for his gesture, Jones replied, "You may as well praise a man for not robbing a bank." The United States Golf Association's sportsmanship award is named the Bob Jones Award in his honor.