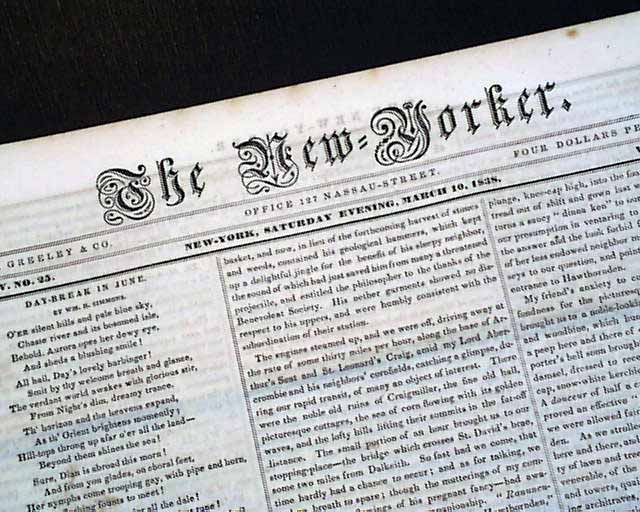 An inside page has a report about an "Extraordinary Plant" that inhabits the "vast prairies" of North America.

About the plant, the report says: "...the ends of the leaves being armed with teeth which the power of closing up on being irritated by any substance, as for instance, a fly: indeed these seem to be the natural food of the plant...", plus mention that in an experiment by a Frenchman they thrived when fed beef scrapings.

Other news and topics throughout. Quarto-size, 16 pages. Nice condition.

wikipedia notes: The Venus Flytrap is found in nitrogen-poor environments, such as bogs and wet savannahs. Small in stature and slow growing, the Venus flytrap tolerates fire well, and depends on periodic burning to suppress its competition. Fire suppression threatens its future in the wild. It survives in wet sandy and peaty soils. Although it has been successfully transplanted and grown in many locales around the world, it is found natively only in North and South Carolina in the United States, specifically within a 60 mile radius of Wilmington, North Carolina.  One such place is North Carolina's Green Swamp. There also appears to be a naturalized species of Venus Flytraps in northern Florida as well as populations in the New Jersey Pine Barrens. The nutritional poverty of the soil is the reason that the plant relies on such elaborate traps: insect prey provide the nitrogen for protein formation that the soil cannot. The Venus Flytrap is not a tropical plant and can tolerate mild winters. In fact, Venus Flytraps that do not go through a period of winter dormancy will weaken and die after a period of time.