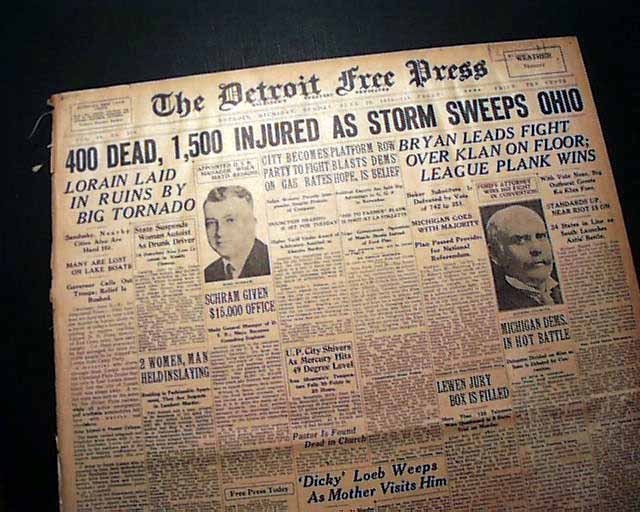 This 50+ page newspaper has a nice banner headline on the front page: "400 DEAD, 1,500 INJURED AS STORM SWEEPS OHIO" with subheads that include: "LORAIN LAID IN RUINS BY BIG TORNADO" and more. (see)

Other news of the day. Usual browning with minor margin wear, otherwise good.

wikipedia notes: The 1924 Lorain-Sandusky was a deadly tornado which struck the towns of Sandusky and Lorain, Ohio on June 28, 1924. At least 85 people were killed by the tornado, with others killed by tornadoes that struck the northern and eastern half of the state. It is the deadliest single tornado and tornado outbreak ever in Ohio history, killing more people than the more famous 1974 Xenia Tornado during the Super Outbreak and the 1985 United States-Canadian tornado outbreak respectively.

On that day, a low pressure system moved from Iowa towards Michigan and Ontario with temperatures were in the lower 80s across most of northern Ohio which are typically normal late-June temperatures across that area.

The tornado formed over the Sandusky Bay during the late afternoon hours and hit the city of Sandusky killed eight and destroying 100 homes and 25 businesses. After moving east over Lake Erie for several miles, the tornado then struck the town of Lorain just west of Cleveland, killing 72 including 15 inside a collapsed theater which makes it the worst tornado-related death toll from a single building in Ohio. Eight people were also killed inside the Bath House nearly the location where the tornado came onshore.

Over 500 homes were destroyed and 1000 others were damaged in the Lorain area as well as every business in the downtown area. Damage amounts was estimated at the time at $12 million and adjusted for wealth the figure jumps to $1 billion (1997 dollars) which ranks it 10th costliest ever ahead of the Oklahoma City area tornado in 1999. A total of 85 were killed with additional deaths outside the two cities and 300 others were injured. While the Fujita scale was not existent at the time, the damage was estimated to be at around F4.

There are still some uncertainties on whether the Sandusky-Lorain tornado was a single tornado event due to the 25-mile path of the storm across Lake Erie between Sandusky and Lorain, however many eyewitnesses showed a single severe storm crossing the Lake before coming on-shore again just after 5:00 PM.[4]

Other tornadoes hit the Castalia (Sandusky County), Huron Township (Erie County) and Geauga Lake (Portage County). At least five other people were killed by tornadoes other than the Sandusky-Lorain F4 including three others in Ohio