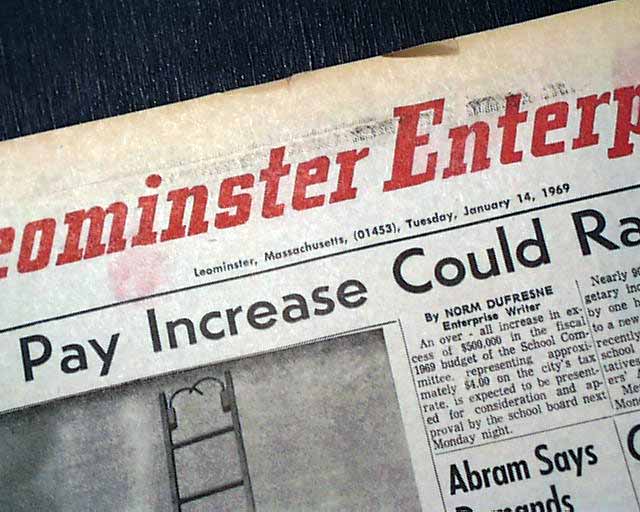 Tells of the homecoming of the New York Jets after beating the mighty Baltimore Colts. Joe Namath became an American hero and icon with his performance and prediction of the game.

Other news of the day throughout. Tiny binding holes along the spine, otherwise in good condition.

wikipedia notes: Super Bowl III was the third AFL-NFL Championship Game in professional American football, but the first to officially bear the name "Super Bowl" (The two previous AFL-NFL Championship Games would retroactively be called "Super Bowls" as well). This game is regarded as one of the greatest upsets in sports history. The heavy underdog American Football League (AFL) champion New York Jets (11-3) defeated the National Football League (NFL) champion Baltimore Colts (13-1) by a score of 16–7. It was the first Super Bowl victory for the AFL.

The game was played on January 12, 1969 at the Orange Bowl in Miami, Florida – the same location as Super Bowl II. Entering Super Bowl III, the NFL champion Colts were heavily favored to defeat the AFL champion Jets. Although the upstart AFL had successfully forced the long-established NFL into a merger agreement three years earlier, the AFL was not generally respected as having the same caliber of talent as the NFL. Plus, the AFL representatives were easily defeated in the first two Super Bowls.

After boldly guaranteeing a victory prior to the game, Jets quarterback Joe Namath completed 17 out of 28 passes for 206 yards, and was named the Super Bowl's Most Valuable Player, despite not throwing a touchdown pass in the game or any passes at all in the fourth quarter.