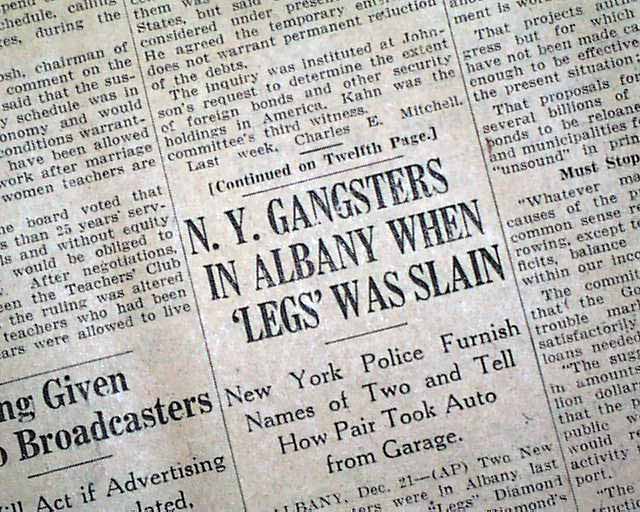 Other news of the day throughout. Light browning with little margin wear, otherwise good.

source: wikipedia: On December 18, 1931, Diamond's enemies finally caught up with him, shooting him after he had passed out at a hideout on Dove Street in Albany, New York after a night party on the day of his trial in Troy. The killers shot him three times in the back of the head at approximately 5:30 AM. However, there were six shots heard, so there's reason to believe a minimal struggle took place. Had he not been killed, he would have gone on to serve the jail time mentioned above.

There has been much speculation as to who was responsible for the murder, including Dutch Schultz, the Oley Brothers (local thugs), and the Albany Police Department. According to William Kennedy's 'O Albany, Democratic Party Chairman Dan O'Connell, who ran the local political machine, ordered Diamond's execution, which was carried out by the Albany Police. The following are Dan O'Connell's own words recorded during a 1974 interview by Kennedy and appears on pages 203 and 204:

"In order for the Mafia to move in they had to have protection, and they know they'll never get it in this town. We settled that years ago. Legs Diamond...called up one day and said he wanted to go into the 'insurance' business here. He was going to sell strong-arm 'protection' to the merchants. I sent word to him that he wasn't going to do any business in Albany and we didn't expect to see him in town the next morning. He never started anything here."

O'Connell added that Fitzpatrick (a Police sergeant and future chief) and Diamond were "sitting in the same room and (Fitzpatrick) followed him out. Fitzpatrick told him he'd kill him if he didn't keep going."

Given the power that the O'Connell machine held in Albany and their determination to prevent organized crime other than their own from establishing itself in the city and threatening their monopoly of vice, most people accept this account of the story. In addition it has been confirmed by other former machine officials.