Home > Back to Search Results > Radical newspaper printed while the publisher was in jail...
Click image to enlarge 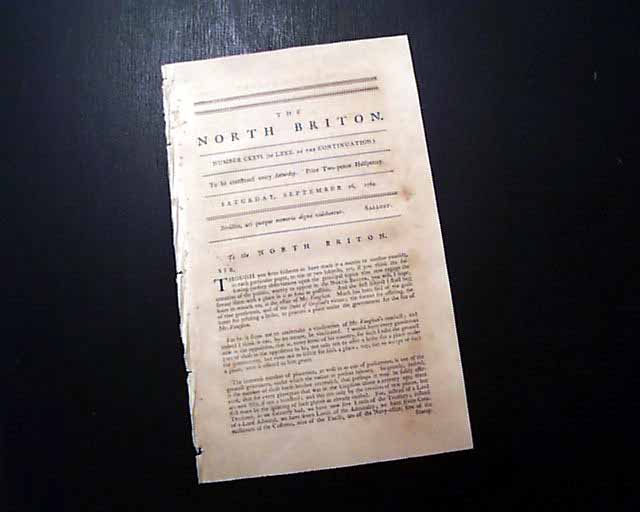 Radical newspaper printed while the publisher was in jail...

* Radical newspaper printed while the publisher was in jail

This was a radical newspaper from the 18th century, very much associated with the name John Wilkes. Wilkes published the issues #1 thru 46.

Issue number 45 (April 23, 1763) is the most famous issue of the paper. It criticized a royal speech in which King George III praised the Treaty of Paris ending the Seven Years' War. Wilkes was charged with libel (accusing the King of lying), and imprisoned for a short time in the Tower of London. Wilkes challenged the general warrant for his arrest and seizure of his paper, eventually winning the case. His courtroom speeches launched the cry "Wilkes and Liberty!", a popular slogan for freedom of speech and resistance to power. By the time Wilkes was released from prison in 1770, "45" had become a popular icon not only of Wilkes, but of liberty and freedom of speech in general.

This issue is not only from the Bingley era but is from the period when he was in jail, as the imprint at the bottom of the bkpg. begins: "Printed for W. Bingley, a prisoner in the King's Bench..." (see).