Home > Back to Search Results > Corregidor Surrenders in 1942....
Click image to enlarge 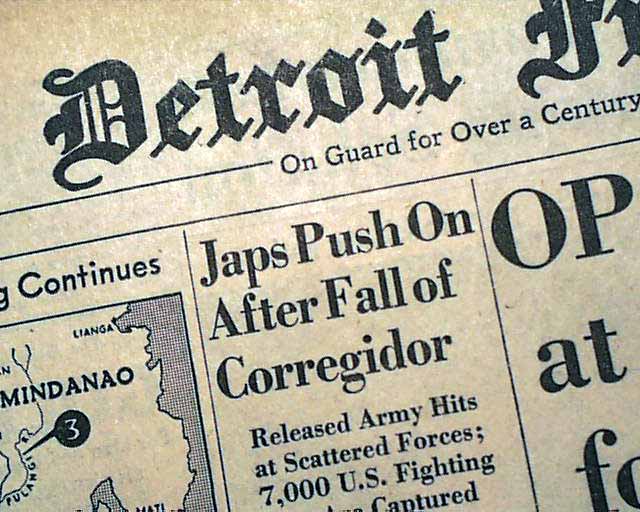 This 28 page newspaper has one column headlines on the front page that include: "Japs Push On After Fall of Corregidor" and more. (see)

wikipedia notes: Japanese forces led by Maj. Gen. Kureo Tanaguchi boarded landing craft and barges and headed for the final assault on Corregidor. Shortly before midnight, intense shelling pounded the beaches between North Point and Cavalry Point. The initial landing of 790 Japanese soldiers quickly bogged down from surprisingly fierce resistance from the American and Filipino defenders whose 37 mm artillery tolled heavily on the landing fleet.

The Japanese struggled because of the strong sea currents between Bataan and Corregidor and from the layers of oil that covered the beaches from ships sunk earlier in the siege, and they experienced great difficulty in landing personnel and equipment. However the overwhelming number of Japanese infantry equipped with 50 mm heavy grenade dischargers ("knee mortars") forced the defenders to pull back from the beach.

The second battalion of 785 Japanese soldiers were not as successful. The invasion force did not prepare for the strong current in the channel between Bataan and Corregidor. This battalion landed east of North Point where the defensive positions of the 4th Marines were stronger. Most of the Japanese officers were killed early in the landing, and the huddled survivors were hit with hand grenades, machine guns, and rifle fire. Some of the landing craft did however make it to the location of the first invasion force and found themselves moving inland enough to capture Denver Battery by 1:30 a.m. on May 6.

A counterattack was initiated to move the Japanese off of Denver Battery. This was the location of the heaviest fighting between the opposing forces, practically face to face. A few reinforcements did make their way to the frontline 4th Marines, but the battle became a duel of obsolete World War I grenades versus the accurate Japanese knee mortars. Without additional reinforcements, the battle would quickly go against the defenders.

By 4:30 a.m. Colonel Howard committed his last reserves, some 500 Marines, sailors and soldiers of the 4th Battalion. These reserves tried to get to the battle as quickly as possible, but several Japanese snipers had slipped behind the front lines to make movement very costly. An additional 880 reinforcements for the Japanese arrived at 5:30 a.m.. The 4th Marines were holding their positions at the same time losing ground in other areas. The Japanese were facing problems of their own: several ammunition crates never made the landing. Several attacks and counterattacks were fought with bayonets.

The final blow to the defenders came about 9:30 a.m. when three Japanese tanks landed and went into action. The men around Denver Battery withdrew to the ruins of a concrete trench a few yards away from the entrance to Malinta tunnel, just as Japanese artillery delivered a heavy barrage. Particularly fearful of the dire consequences should the Japanese capture the tunnel, where lay 1,000 helpless wounded men, and realizing that the defenses outside Malinta tunnel could not hold out much longer, and expecting further Japanese landings that night, General Wainwright decided to sacrifice one more day of freedom in exchange for several thousand lives. In a radio message to President Franklin Roosevelt, Wainwright said, "There is a limit of human endurance, and that point has long been passed." Colonel Howard burned the 4th Regiment's and national colors to prevent their capture by the enemy. Lt. Gen. Jonathan Wainwright finally surrendered the Corregidor garrison at about 1:30 p.m. on May 6, 1942, with two officers sent forward with a white flag to carry his surrender message to the Japanese. 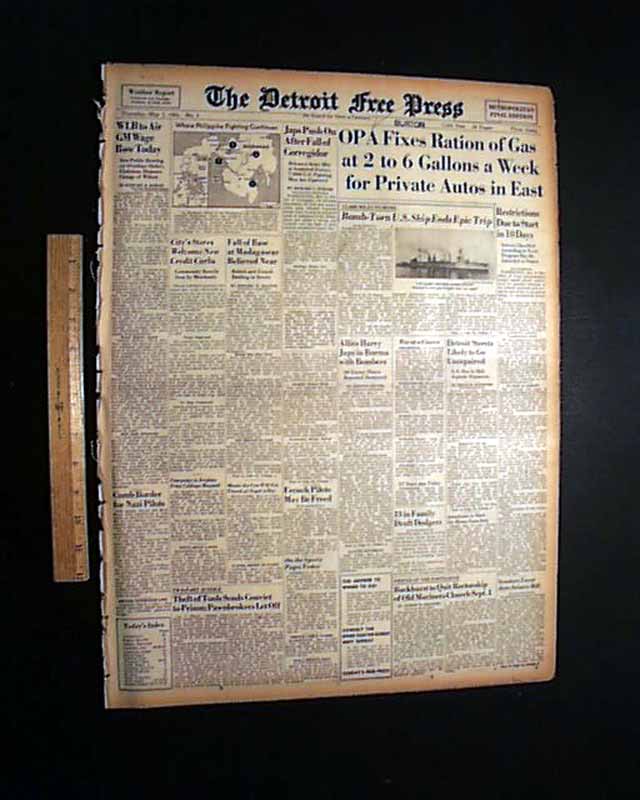 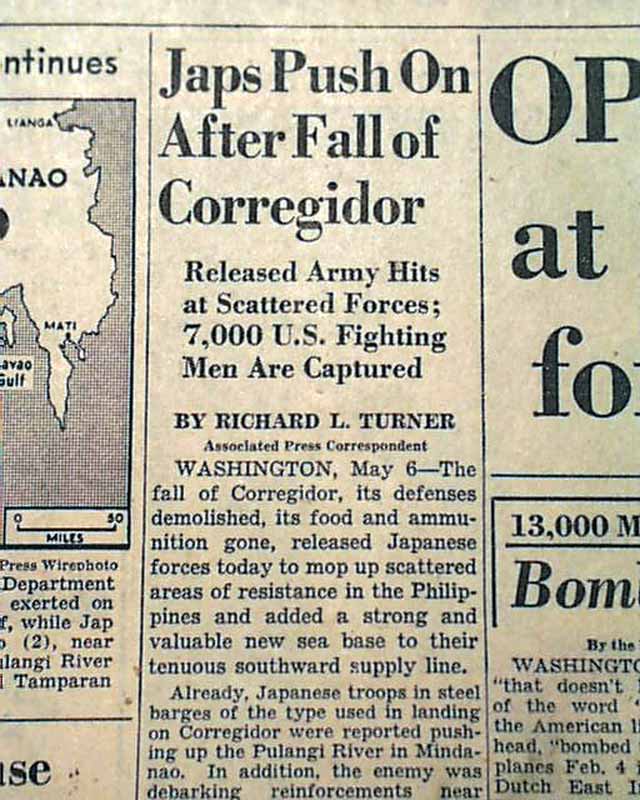 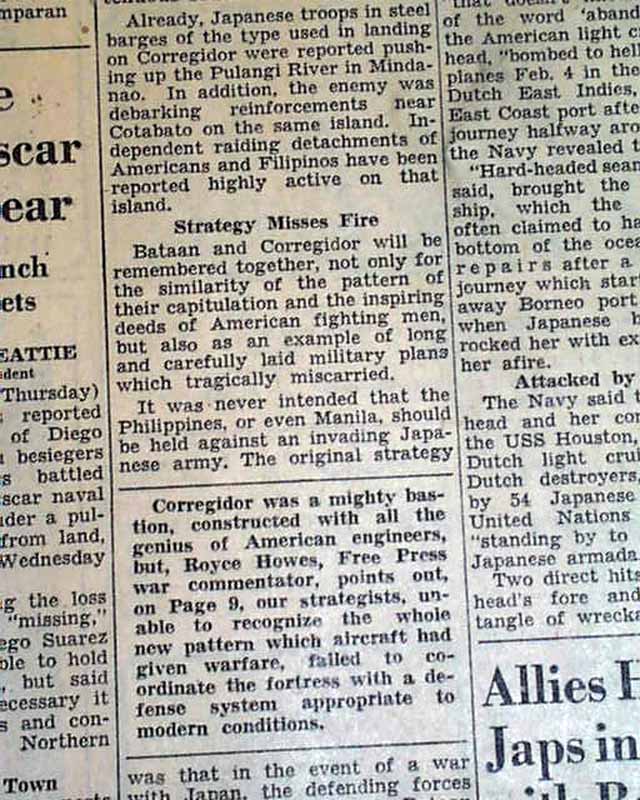 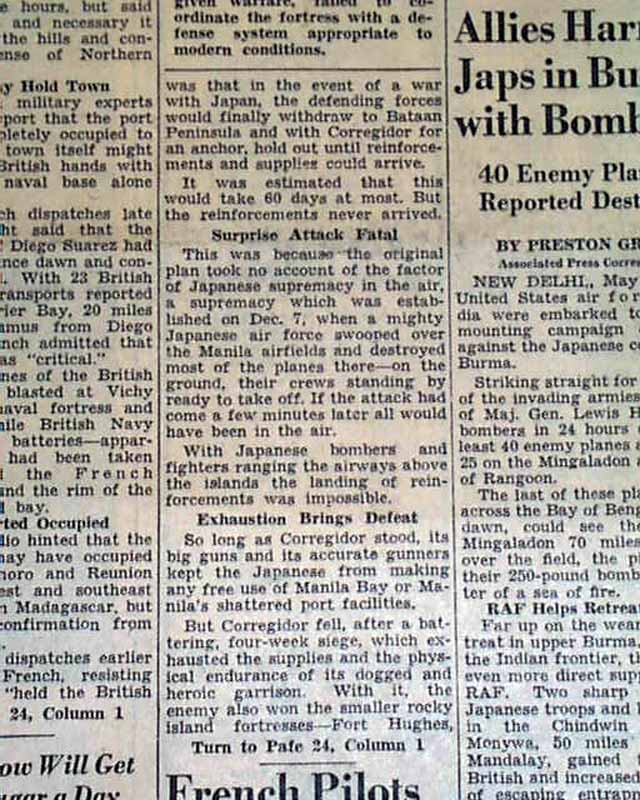