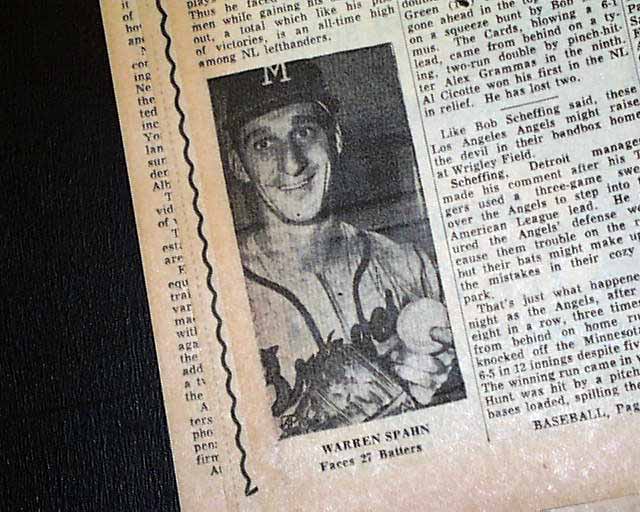 This 14 page newspaper has a two column headline on page 10: "Spahn In No-Hitter For 290th Victory" with photo of Spahn. Tells of his 2nd no-hitter at the age of 41 years. (see)

wikipedia notes: Warren Edward Spahn (April 23, 1921 – November 24, 2003) was an American left-handed pitcher in Major League Baseball who played for 21 seasons, all in the National League. He won 20 games each in 13 seasons, including a 23-7 record when he was aged 42. Spahn was the 1957 Cy Young Award winner, and was the runner-up three times, all during the period when just one award was given. He was elected to the Baseball Hall of Fame in 1973, with 83% of the total vote. (His eligibility was delayed, under the rules of the time by 2 years of token minor league play).

Spahn was regarded as a "thinking man's" pitcher who liked to outwit batters. He once described his approach on the mound: "Hitting is timing. Pitching is upsetting timing."