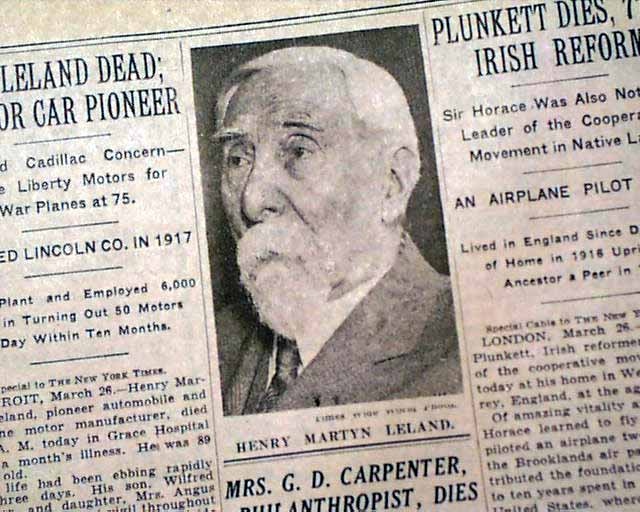 This 70+ page newspaper has a two line, one column headline on page N5: "H. M. LELAND DEAD; MOTOR CAR PIONEER" with subheads that include: "Founded Cadillac Concern - Made Liberty Motors for War Planes at 75"

and more with a one column photo of Henry Martyn Leland.

He learned precision engineering and manufacturing in the firearms industry, where ultrafine tolerances were required. He applied this expertise to the nascent motor industry as early as 1870 as a principal in the machine shop Leland & Faulconer, and later was a supplier of engines to Ransom E. Olds's company, Oldsmobile. He also invented the electric barber clippers, and for a short time produced a unique toy train, the Leland-Detroit Monorail.

Hired by William Murphy and his partners of the Henry Ford Company as an adviser in 1902, then later to sort through problems on the shop floor. A clash quickly came when he gave orders to Henry Ford. Ford understood he was in charge, however, the partners took Leland's side, and Ford was shown the door. Ford got $900 cash and the designs for a new car he was working on. The partners got the car Ford had been hired to produce. Taking Henry Ford's car they removed his engine and replaced it with the precision single cylinder engine produced by Henry Leland. The directors lost no time in renaming the company Cadillac.

At Cadillac, Leland pioneered many modern manufacturing processes, including the use of interchangeable, replaceable parts that could be manufactured by machine shops. This apparently independent extension of a principle credited to Eli Whitney allowed automobiles to be repaired by independent garages and owners.

Leland sold Cadillac to General Motors on July 29, 1909 for $5.6 million but remained as an executive until 1917. He left in dispute over the company's involvement in the war effort and formed the Lincoln Motor Company to build Liberty aircraft engines. After the war, the company's factories were retooled to manufacture luxury automobiles.

In 1922 Lincoln became insolvent and was bought out by Henry Ford's Ford Motor Company. Ford's bid of $8 million was the only bid at a receivers sale. Ford had first offered $5 million, but the judge would not accept it for a well-equipped company whose assets were conservatively estimated at $16 million.[2] After the sale Henry Leland and his son Wilfred continued to run the company, believing they would still have full control to run the company as they saw fit. Ford assigned a number of their people to Lincoln, they said to learn. However, it soon became clear they were there to streamline their production and stop the loss of money that had bankrupted Lincoln. Relations between the Henry Ford and the Leland's continued to deteriorate. On June 10, 1922, Ford executive Ernest Liebold arrived at Lincoln to ask for the resignation of Wilfred Leland. When it became clear that Mr Leibold had the full authority of Henry Ford, Henry Leland resigned as well. That afternoon both men were shown out of the factory they had created.

The Lincoln continues to be part of the luxury line of Ford to this day.