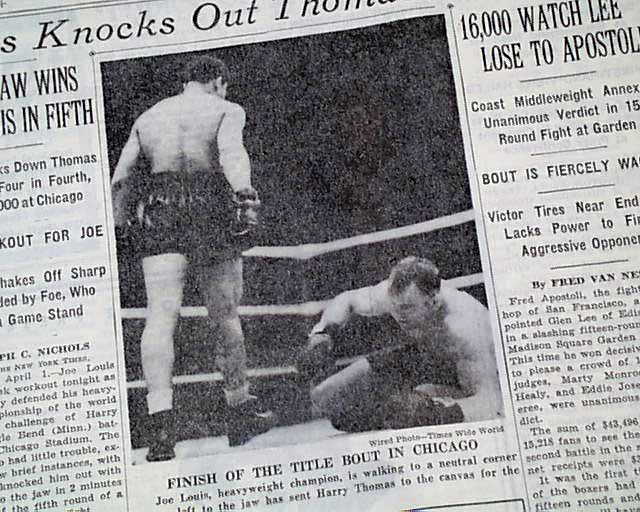 This 32 page newspaper has a six column headline on page 10: "Louis Knocks Out Thomas in Chicago to Keep Title" with subheads, round by round reports and a related photo.

Nicknamed the Brown Bomber, he is considered to be one of the greatest champions in boxing history and was ranked number one on Ring Magazine's list of 100 greatest punchers of all time. Louis held the heavyweight title for over 140 months, more than anyone else before or after him, recording 25 successful defenses of the title. In 2005, Louis was named the greatest heavyweight of all time by the International Boxing Research Organization. He participated in 27 heavyweight championship fights, a record which still stands.
Louis' cultural impact outweighed even his accomplishments in the ring. Beyond being a hero in the black community, Louis became the first African American to be a true nationwide hero throughout the United States, and was a focal point of anti-Nazi sentiment during World War II.  He also was instrumental in integrating the game of golf, breaking the sport's color barrier by appearing under a sponsor's exemption in a PGA event in 1952.