Home > Back to Search Results > Spangler Pennsylvania Mine disaster...
Click image to enlarge 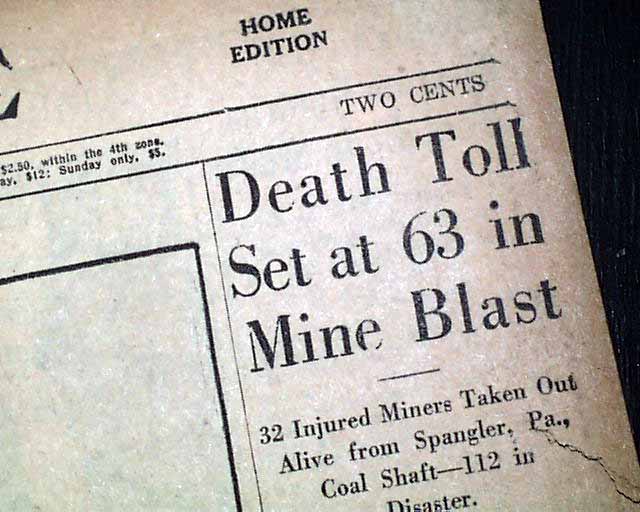 This 12 page newspaper has one column headlines on the front page that include: "Death Toll Set at 63 in Mine Blast", "50 Bodies Recovered....etc." and more.

Other news of the day. Usual browning with margin wear and minor text loss. Should be handled with care.

wikipedia notes: A mining disaster occurred on Nov. 6, 1922 at Reilly No. 1 Mine. 79 miners were killed when an explosion occurred at 7:20 a.m. as 112 men had began work. The explosion blew out some stoppings and overcasts and also the side and end walls of the fan housing. Help was called from other mines and from the Bureau of Mines at Pittsburgh. The fan housing was patched and the fan started, making the concrete-lined, 112 foot shaft an intake. Recovery workers without apparatus encountered a live man making his way out to fresh air and brought him and four others out. All were badly affected by mine gases, as were 18 of the rescuers. Apparatus crews were then admitted, and 22 other survivors were rescued. Five other men made their way out unassisted. Seventy-six bodies were found, and 3 of the rescued men died. The reasons for the explosion were explained. The mine had been rated gaseous in 1918, but at the insistence of the new operators it was rated as non-gaseous although a fireboss was employed and men burned by gas on at least 4 occasions. The low-volatile dust of this coal helped to spread the explosion. Gas that had accumulated in one or more rooms through open doors and deficient ventilation was ignited by the miners' open lights. Fireboss examinations were neglected and incomplete. A monument constructed to the memory of those lost in this disaster stands in a park near the center of the town.