Home > Back to Search Results > Houston Riot of 1917...
Click image to enlarge 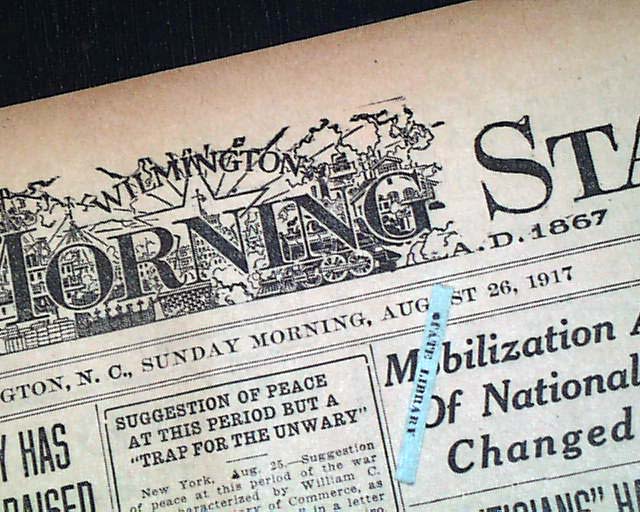 This 8 page newspaper has one column headlines on page 2 that include: "NEGROES ARE GONE HOUSTON IS QUIET" "Grand Jury Returns Murder Indictments Against 40 Members of 24th Infrantry" and more. (see)

wikipedia notes: Around noon, on August 23, 1917, two Houston policemen detained a black American soldier for interfering with their detention and questioning of a black American woman. Early in the afternoon, Corporal Charles Baltimore went to the station to inquire about the soldier's arrest, and was confronted by policemen, one of whom hit Baltimore over the head.[citation needed] Baltimore attempted to flee, but the police fired at Baltimore three times, chased him into an unoccupied house, and took him to police headquarters.[citation needed] Though he was later released, a rumor quickly reached Camp Logan that Baltimore had been shot and killed.[citation needed]

News of these events reached the Third Battalion around the same time as a rumor that an armed mob of white citizens was heading in their direction. The Battalion organized under Sgt. Vida Henry of I Company and moved out, hoping to quell any local insurgency. Thus began what would become known as the Houston Riot of 1917. Sergeant Henry led about one hundred and fifty black soldiers in a two-hour march on the City of Houston. The soldiers were met by local policemen and a great crowd of Houston residents who had armed themselves. When the group killed Captain J.W. Mattes, of the Illinois National Guard (after mistaking him for a local policeman), the Battalion fell into disarray and Sgt. Henry shot himself, distraught over having killed another serviceman. In their two-hour march on the city, the Battalion killed fifteen armed whites, including four policemen, and seriously wounded twelve others, one of whom, a policeman, subsequently died. Four black soldiers also died. Two were accidentally shot by their own men, one in camp and the other on San Felipe Street.