Home > Back to Search Results > The Great Smog of 1952...
Click image to enlarge 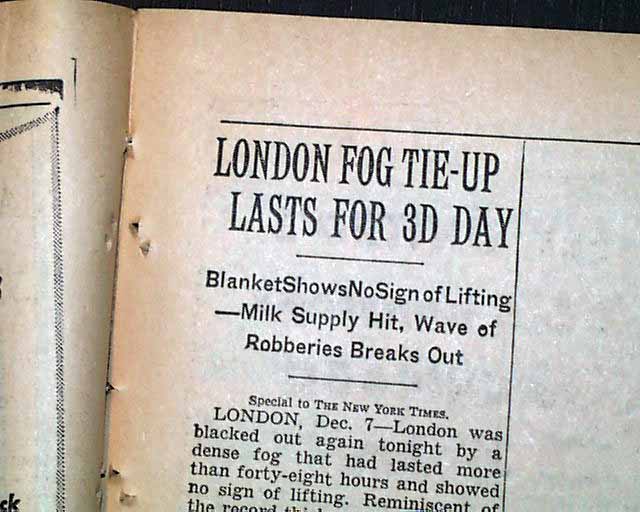 This 56 page newspaper has one column headlines on page 17: "LONDON FOG TIE-UP LAST FOR 3D DAY" and "Blanket Shows No Sign of Lifting--Milk Supply Hit, Wave of Robberies Break Out". Tells of the great London smog of 1952 which resulted in many casualties.

Other news of the day. Light browning with minor margin wear, otherwise in nice condition.

wikipedia notes: The Great Smog (or "Big Smoke")[1] of London refers to the severe smog that affected the city during the period of Friday 5th to Tuesday 9th December 1952, and is acknowledged as the UK's worst air pollution event.[2] Earlier reports suggested that 4000 died prematurely and 100,000 were made ill by the Great Smog, but more recent research has shown that the number of smog-related deaths was underestimated and is now thought to be considerably higher - around 12,000. The London Smog of 1952 is acknowledged as one of the most significant pollution episodes in history in terms of its impact on environmental research, government regulation, and public awareness of the relationship between air quality and health.