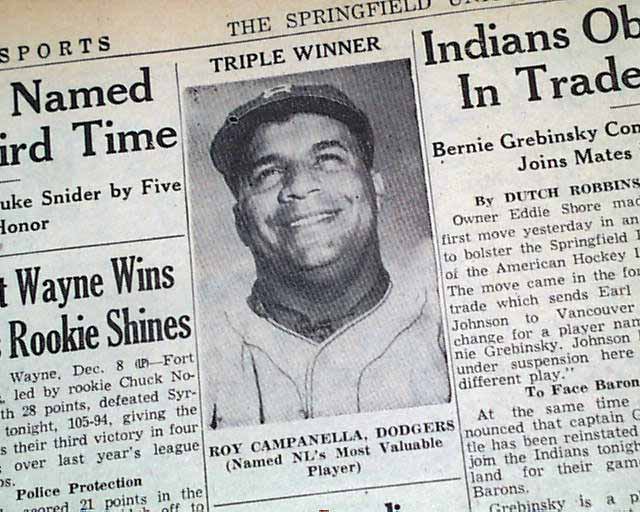 This 40 page newspaper has two column headlines on page 34: "Campanella Is Named MV for Third Time" and "Brooklyn Catcher Beats Out Duke Snider by Five Votes for 1955 Honor" with one column photo of Campy. (see)

Other news of the day throughout. minor spine wear, otherwise in good condition.

wikipedia notes: Roy Campanella (November 19, 1921 – June 26, 1993), nicknamed "Campy", was an American baseball player — primarily at the position of catcher — in the Negro Leagues and Major League Baseball. He was born in Philadelphia, Pennsylvania.

Widely considered to have been one of the greatest catchers in the history of the game, Campanella played for the Brooklyn Dodgers during the 1940s and 1950s, as one of the pioneers in breaking the color barrier in Major League Baseball. His career was cut short in 1958 when he was paralyzed in an automobile accident.

Jackie Robinson's first season in the Major Leagues came in 1947, and Campanella began his Major League career with the Brooklyn Dodgers the following season. Campanella's first game was on April 20, 1948. He went on to play for the Dodgers from 1948 through 1957 as their regular catcher. In 1948, he had three different uniform numbers (33, 39, and 56) before settling down to number 39 for the rest of his career.

Campanella played in the All-Star Game every year from 1949 through 1956. His 1949 All-Star selection made him one of the first four African-Americans so honored. (Jackie Robinson, Don Newcombe and Larry Doby were also All-Stars in 1949.)[4] Campanella received the Most Valuable Player (MVP) award in the National League three times: in 1951, 1953, and 1955. In each of his MVP seasons, he batted over .300, hit over 30 home runs and had over 100 runs batted in. His 142 RBIs in 1953 broke the franchise record of 130, which had been held by Jack Fournier (1925) and Babe Herman (1930). Today it is the second-most in franchise history, Tommy Davis breaking it with 153 RBIs in 1962. That same year Campanella hit 40 home runs in games in which he appeared as a catcher, a record that lasted until 1996, when it was broken by Todd Hundley.

In 1955, Campanella's third MVP season helped propel Brooklyn to its long-awaited first-ever World Series Championship. After the Dodgers dropped the first two games of that year's World Series to the Yankees, Campanella began Brooklyn's comeback by hitting a two-out, two-run home run in the first inning of Game 3. The Dodgers won that game, got another home run from Campanella in a Game 4 victory that tied the series, and then went on to claim the series in seven games.

After the 1957 season, the Brooklyn Dodgers relocated to Los Angeles, California, and became the Los Angeles Dodgers, but Campanella's playing career came to an end before he ever played a game for Los Angeles.