Home > Back to Search Results > Charles Dickens on newspapers... The Civil War...
Click image to enlarge 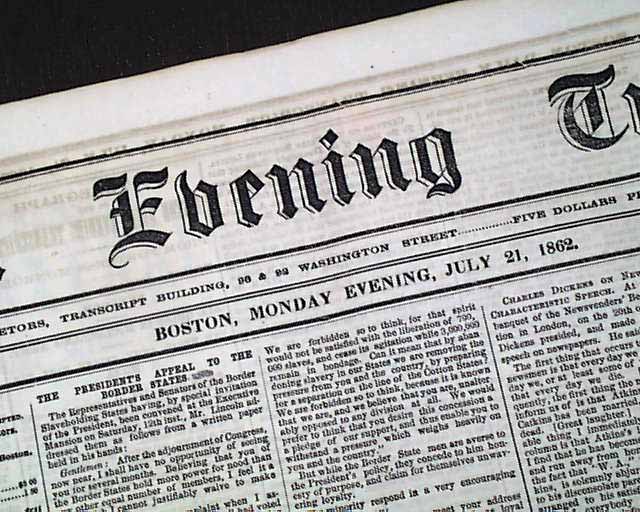 
BOSTON EVENING TRANSCRIPT, July 21, 1862  The ftpg. has two-thirds of a column taken up with: "Charles Dickens on Newspapers, being a witty speech delivered in London (see for full text). The ftpg. also has: "The President's Appeal to the Border States" and "Federal Prisoners Released on Parole".  Yet another item of note is an interesting piece on the transition from boyhood to manhood.
Page 2 has much on the Civil War, with: "Rebel Attack Feared at Suffolk" "The Rebel Army Fallen Back Ten Miles" "Gen. Halleck's Departure" "General Grant in Command" "Occupation of Charlottesville" "Levies Upon the Rebels" "Gen. Halleck's Position" and more. Additional war reports on pgs. 3 & 4 as well.