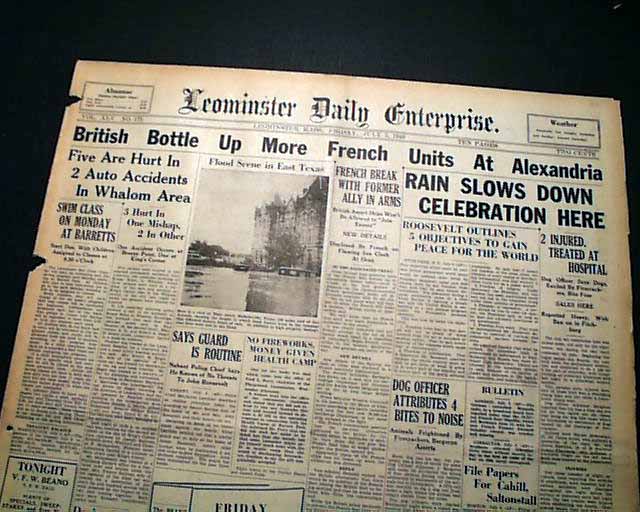 This 10 page newspaper has a banner headline on the front page: "British Bottle Up More French Units At Alexandria" with subheads. (see photos) Other news of the day throughout.

source: wikipedia: The Attack on Mers-el-Kébir, also known as Operation Catapult, was a hostile engagement off the coast of French Algeria where a British Royal Navy task force attacked and destroyed much of the French fleet stationed there, in an attempt to avoid its falling into the hands of the German Navy. This event shocked the world, as Britain had attacked and destroyed its ally's fleet despite reassurances from France that it would not let it fall into German hands. The incident took place on 3 July 1940.

In 1940, during World War II, following the armistice between France and Nazi Germany, the potential use of the French fleet against Britain became a vital concern. Such a shift in the balance of power at sea would have seriously threatened Britain's ability to protect her supply lines and jeopardise her chances of survival. The British government feared the Germans could take control of the ships, despite Armistice terms denying such a possibility and assurances by French leaders (indeed, a later German attempt resulted in the French fleet scuttling itself rather than allow German control of the fleet in 1942). It also emerged later that Hitler did not have the intention or the means to do so[1]. Winston Churchill ordered that the French Navy (Marine Nationale) should either join forces with the British Royal Navy or be neutralised in some way, to prevent the ships from falling into German or Italian hands.

The French fleet was widely dispersed. Some vessels were in port in France; others had escaped from France to British controlled ports, mainly in Britain itself or Alexandria in Egypt. At the first stage of Operation Catapult, the ships in the British ports of Plymouth and Portsmouth were simply boarded on the night of 3 July 1940. On the then-largest submarine in the world, the Surcouf, which had sought refuge in Portsmouth in June 1940 following the German invasion of France, the crew resisted; two British officers and one French sailor were killed. The attack on the French vessels at port sowed anger amongst the French towards their ally and increased tension between Churchill and the leader of the Free French Forces, Charles de Gaulle.

Other ships were the two obsolete battleships Paris and Courbet, the destroyers Le Triomphant and Léopard, eight torpedo boats, five submarines and a number of other ships of lesser importance. Many – including the Surcouf – went on to be used by the Free French forces. Some sailors joined the Free French while others were repatriated to France.