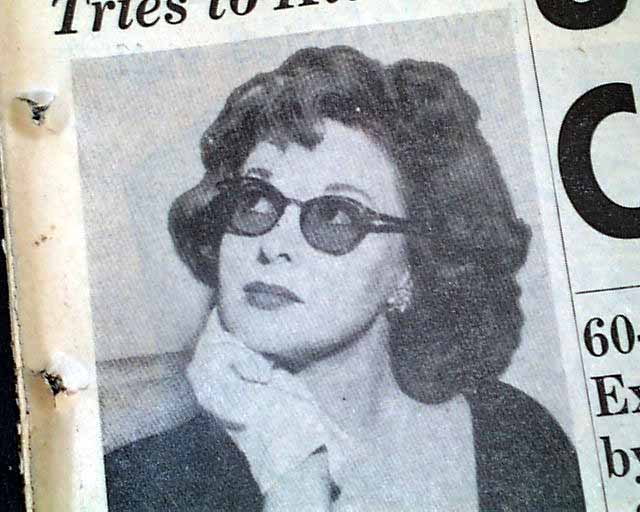 This 56 page newspaper has a two column headline above a nice photo of Susan Hayward on the front page: "Susan Hayward Tries to Kill Self" with reporting on her suicide attempt in Hollywood by taking sleeping pills.

After working as a fashion model in New York, Hayward travelled to Hollywood in 1937 in the hope of playing the role of Scarlett O'Hara in Gone With the Wind (1939). Although she was not selected, she secured a film contract, and played several small supporting roles over the next few years. By the late 1940s the quality of her film roles had improved, and she achieved recognition for her dramatic abilities with the first of five Academy Award nominations for Best Actress. Her career continued successfully through the 1950s and she won the Academy Award for Best Actress for her portrayal of death row inmate Barbara Graham in I Want to Live! (1958).

By this time, Hayward was married and living in Georgia and her film appearances became infrequent, although she continued acting in film and television until 1972. She died in 1975 following a long battle with brain cancer.