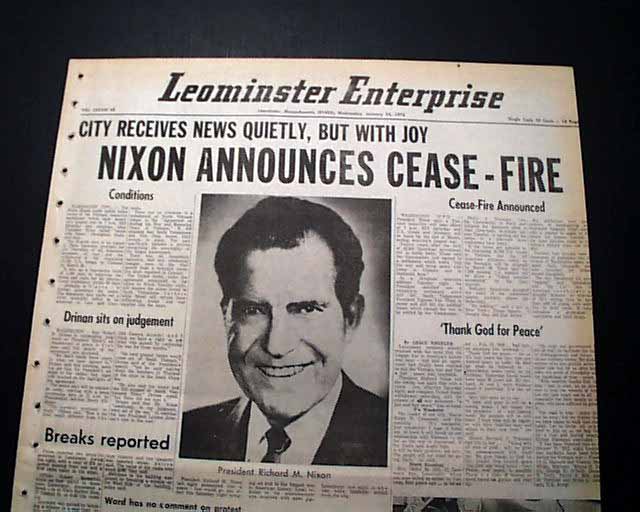 This 14 page newspaper has a nice banner headline on the front page: "NIXON ANNOUNCES CEASE-FIRE" with subheads and a three column photo of Richard Nixon. A cease fire was never entirely made here as they continued fighting until 1975.

Other news of the day. Some small binding holes along the spine and close cut along the right margin, otherwise good.

The United States entered the war to prevent a communist takeover of South Vietnam as part of their wider strategy of containment. Military advisors arrived beginning in 1950. U.S. involvement escalated in the early 1960s and combat units were deployed beginning in 1965. Involvement peaked in 1968 at the time of the Tet Offensive. Despite a peace treaty signed by all parties in January 1973, fighting continued. In April 1975, North Vietnam captured Saigon. North and South Vietnam were reunified the following year.

The war exacted a huge human cost in terms of fatalities, including 3 to 4 million Vietnamese from both sides, 1.5 to 2 million Laotians and Cambodians, and 58,159 U.S. soldiers.