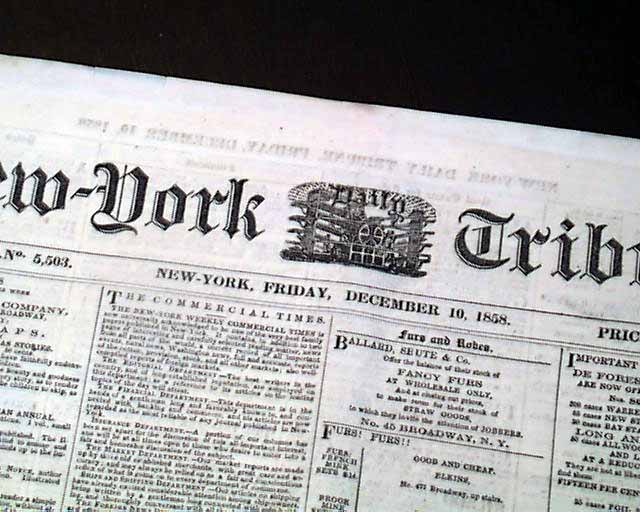 
NEW-YORK TRIBUNE, December 10, 1858  Page 4 has a detailed editorial that criticizes the release of the contract to the highest bidder for the completion of Central Park. A back page report about the "Pike's Peak Mines" has details about the fair quantities of gold "...to be had at these mines."
Other news of the day. Wear at the spine, archival mend to a hole/tear in the outer margin, otherwise good. 8 pages.

wikipedia notes: The Pike's Peak Gold Rush (later known as the Colorado Gold Rush) was the boom in gold prospecting and mining in the Pike's Peak Country of western Kansas Territory and southwestern Nebraska Territory of the United States that began in July 1858 and lasted until roughly the creation of the Colorado Territory on February 28, 1861. An estimated 100,000 gold seekers took part in one of the greatest gold rushes in North American history.[1] The participants in the gold rush were known as Fifty-Niners after 1859, the peak year of the rush and often used the motto Pike's Peak or Bust!