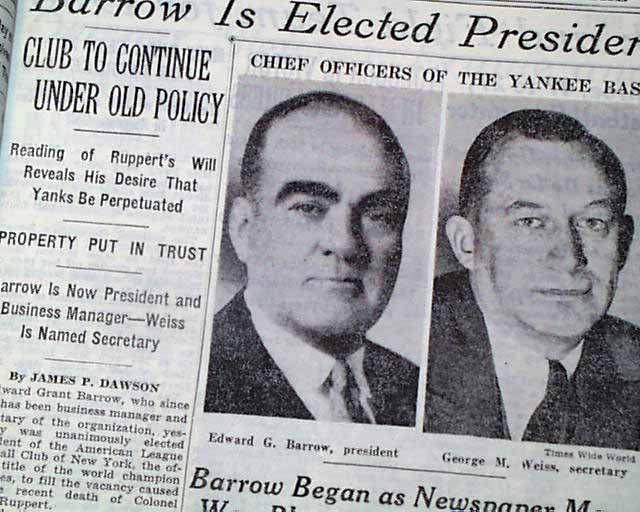 
THE NEW YORK TIMES, January 18, 1939  This 42 page newspaper has a nice banner headlines on page 23: "Barrow Is Elected President of Yanks After George Ruppert Declines Post" with many subheads and related photos.
Other news of the day throughout. Rag edition in great condition.

wikipedia notes: Edward Grant Barrow (May 10, 1868 - December 15, 1953) was an American manager and executive in Major League Baseball who guided the Boston Red Sox to the 1918 World Series title, then built the New York Yankees into baseball's premier franchise and greatest dynasty as their top executive from 1921 to 1945. Barrow would use trades, the development of talent through a farm system and the outright purchase of players to build a Yankee team that would win 14 pennants and 10 World Series between 1921 and 1945.

Born in Springfield, Illinois, Barrow managed and co-owned the Toronto team in the Eastern League from 1900 to 1902, and got his first chance at managing in the major leagues with the Detroit Tigers in 1903, finishing fifth. He won the World Series in his first year with the Red Sox, but managed the team only two more years as owner Harry Frazee began selling the contracts of star players.