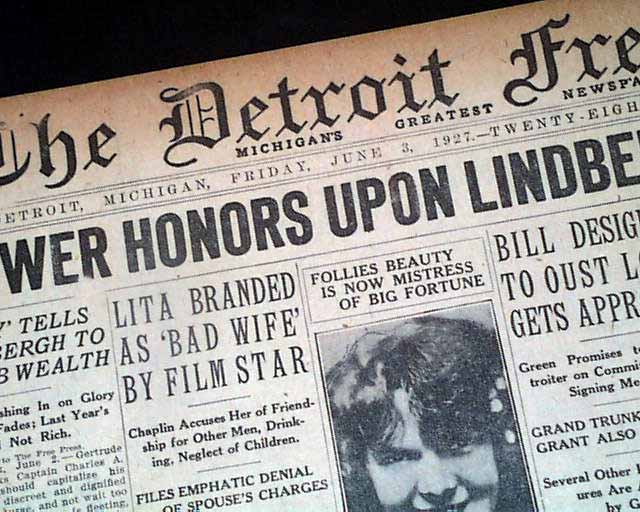 This 28 page newspaper has one column headlines on the front page that include:

* LITA BRANDED AS 'BAD WIFE' BY FILM STAR
* Chaplin Accuses Her of Friendship For Other Men, Drinking, Neglect of Children

Other news of the day. Usual browning with little spine wear, otherwise good. Should be handled with care.

wikipedia notes: Chaplin first met Lita Grey during the filming of The Kid. Three years later, at age 35, he became involved with the then 16-year-old Grey during preparations for The Gold Rush in which she was to star as the female lead. They married on 26 November 1924, after she became pregnant (a development that resulted in her being removed from the cast of the film). They had two sons, the actors Charles Chaplin, Jr. (1925–1968) and Sydney Earle Chaplin (1926–2009). The marriage was a disaster, with the couple hopelessly mismatched. The couple divorced on 22 August 1927.[24] Their extraordinarily bitter divorce had Chaplin paying Grey a then-record-breaking US$825,000 settlement, on top of almost one million dollars in legal costs. The stress of the sensational divorce, compounded by a federal tax dispute, allegedly turned his hair white. The Chaplin biographer Joyce Milton asserted in Tramp: The Life of Charlie Chaplin that the Grey-Chaplin marriage was the inspiration for Vladimir Nabokov's 1950s novel Lolita. This allegation runs contrary to recent scholarship on Nabokov literature, namely the discovery of the 1916 Lolita novel by Heinz von Eschwege.