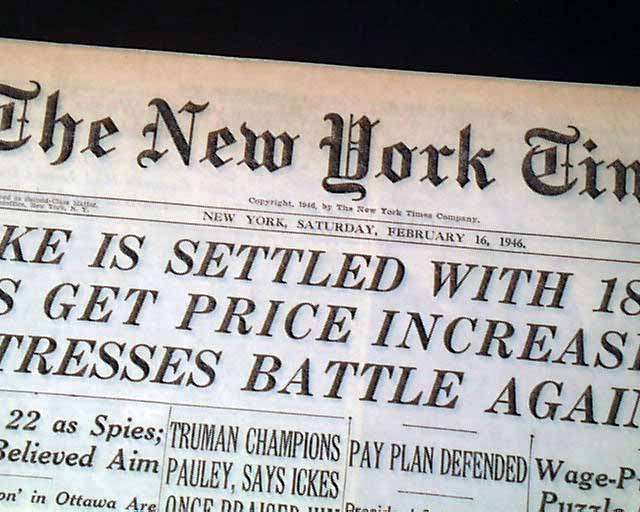 This 26 page newspaper has small column headlines on page 7: "Robinson Wins In Second", "Stops Bell as 14,922 Fans Look On in Detroit" with short report.

This is a small report probably because it was before he officially became a title holder.

Other news of the day throughout. Rag edition in nice condition save for minor spine wear.

source: wikipedia: Sugar Ray Robinson (born Walker Smith Jr., May 3, 1921 – April 12, 1989) was a professional boxer. Frequently cited as the greatest boxer of all time, Robinson's performances at the welterweight and middleweight divisions prompted sportswriters to create "pound for pound" rankings, where they compared fighters regardless of weight. He was inducted into the International Boxing Hall of Fame in 1990.

Robinson was 85-0 as an amateur with 69 of those victories coming by way of knockout, 40 in the first round. He turned professional in 1940 at the age of 19 and by 1951 had a professional record of 128-1-2 with 84 knockouts. Robinson held the world welterweight title from 1946 to 1951, and won the world middleweight title in the latter year. He retired in 1952, only to come back two and a half years later and regain the middleweight title in 1955. He then became the first boxer in history to win a divisional world championship five times, a feat he accomplished by defeating Carmen Basilio in 1958 to regain the middleweight championship. Robinson was named "fighter of the year" twice: first for his performances in 1942, then nine years and over 90 fights later, for his efforts in 1951. He engaged in several multi-fight rivalries with other Hall of Fame fighters such as Jake LaMotta, Carmen Basilio, Gene Fullmer, and Carl 'Bobo' Olson. Robinson engaged in 200 pro bouts, and his professional career lasted nearly 26 years.

Robinson was named the greatest fighter of the 20th century by the Associated Press, and the greatest boxer in history by ESPN.com in 2007. The Ring magazine rated him the best pound for pound boxer of all-time in 1997, and its "Fighter of the Decade" for the 1950s. Muhammad Ali, who repeatedly called himself "The Greatest" throughout his career, ranked Robinson as the greatest pound for pound boxer of all time. Other Hall of Fame boxers such as Joe Louis and Sugar Ray Leonard have said the same.

Renowned for his flamboyant lifestyle outside the ring, Robinson is credited with being the originator of the modern sports "entourage". After his boxing career ended, Robinson attempted a career as an entertainer, but struggled, and lived in poverty until his death in 1989. In 2006, he was featured on a commemorative stamp by the United States Postal Service.