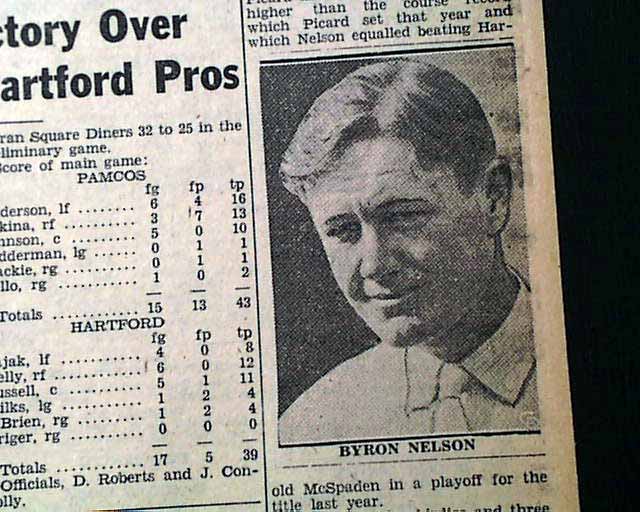 This 8 page newspaper has a one column headline on page 5: "Byron Nelson New Orleans Open Winner" with a one column photo of Byron Nelson. Other news of the day. 8 pages in good condition save for minor margin wear.

wikipedia notes: The Zurich Classic of New Orleans is a regular golf tournament on the PGA Tour. It is played annually in New Orleans, Louisiana; its historic date has been in April, but was moved to March in 2008. Zurich Financial Services is the main sponsor of the tournament. The 2008 purse was $6,200,000, with $1,116,000 going to the winner.

From the event's inception through 2004, it was played at a series of courses in New Orleans. It began at New Orleans City Park, where it was played until 1962. From 1963 until 1988, the event began its lengthy relationship with Lakewood Country Club before shifting to English Turn Golf & Country Club from 1989–2004. In 2005, it was played at the TPC of Louisiana in Avondale, Louisiana, but damage done to the course by Hurricane Katrina forced the event back to English Turn G&CC in 2006. It returned to the TPC of Louisiana in 2007.