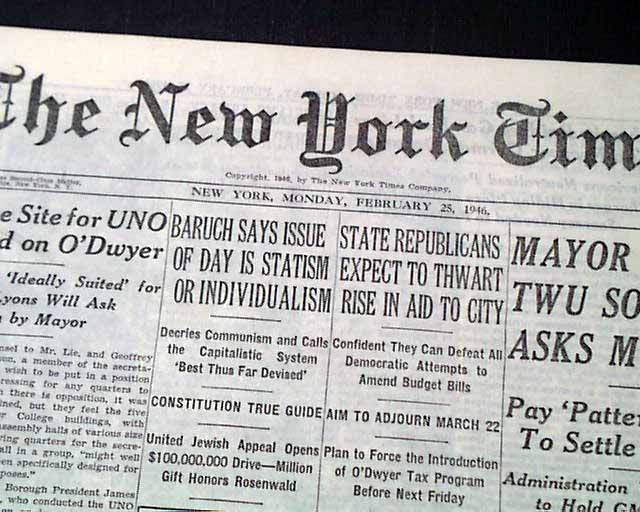 This 38 page newspaper has one column headlines on the front page:

* ARGENTINES BALLOT IN ORDERLY CROWDS FOR NEW PRESIDENT
* Nation's Poll of 3,000,000 Under Guard of Army Is Peaceful Everywhere

and more. Continues on page 3 with related photos.

Other news of the day. Rag edition in great condition.

wikipedia notes: Juan Domingo Perón (October 8, 1895 – July 1, 1974) was an Argentine general and politician, elected three times as President of Argentina, after serving in several government positions, including the Secretary of Labor and the Vice Presidency. He was overthrown in a military coup in 1955. He returned to power in 1973 and served for nine months, until his death in 1974 when he was succeeded by his third wife, Isabel Martínez.

Perón and his second wife, Eva, were immensely popular amongst many of the Argentine people, and to this day they are still considered icons by the Peronist Party. The Peróns' followers praised their efforts to eliminate poverty and to dignify labor, while their detractors considered them demagogues and dictators. The Peróns gave their name to the political movement known as peronismo, which in present-day Argentina is represented by the Justicialist Party.