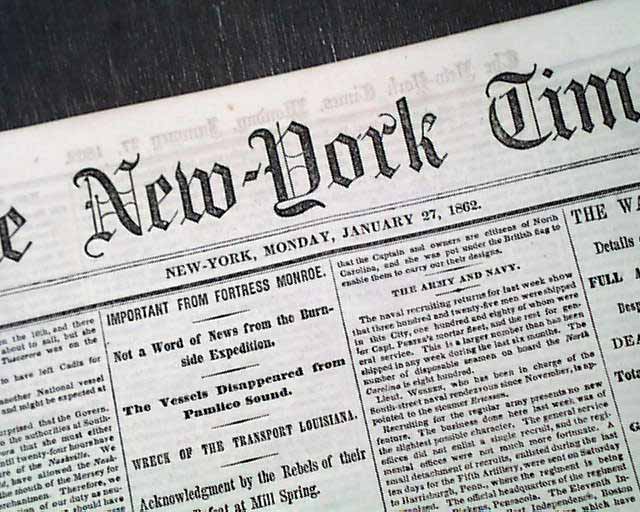 * THE WAR IN KENTUCKY
* Details of the Battle of Mill Creek
* Full Account Of The Action
* Desperate Fighting on Both Sides
* DEATH OF ZOLLICOFFER
* Total Rout and Demoralization of the Enemy
* Important From Fortress Monroe
* The Capture Of Cedar Keys, Florida

Complete in eight pages. This issue is not fragile as newsprint from this era was made of cotton and linen rags, allowing them to remain very pliable and easy to handle condition. Nice condition.

wikipedia notes: The Battle of Mill Springs, also known as the Battle of Fishing Creek in Confederate terminology, and the Battle of Logan's Cross Roads in Union terminology, was fought in Wayne and Pulaski counties, near current Nancy, Kentucky, on January 19, 1862, as part of the American Civil War. It concluded an early Confederate offensive campaign in eastern Kentucky. While considered a small battle in comparison to many in the Civil War, the battle at Mill Springs was the second largest in Kentucky (only Perryville had more bloodshed). It was also the first significant Union victory, much celebrated in the popular press, but was soon eclipsed by Ulysses S. Grant's victories at Forts Henry and Donelson.