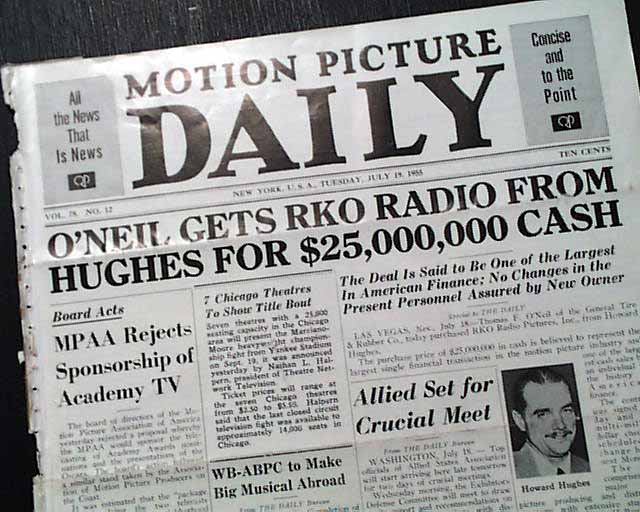 This 6 page issue has a two line banner headline on the front page: "O'NEIL GETS RKO RADIO FROM HUGHES FOR $25,000 CASH" with subhead and small photo of Hughes. (see) Nice title to have this report in.

Other movie and radio entertainment news throughout.

wikipedia notes: While Hughes's time at RKO was marked by dwindling production and a slew of expensive flops (as well as further witch hunts for suspected Reds), the studio continued to turn out some good films under production chiefs Sid Rogell and Sam Bischoff, each of whom became fed up with Hughes's meddling and quit after less than two years. (Bischoff would be the last man to hold the job under Hughes.[56]) There were B noirs such as The Set-Up and The Window (both 1949), whose reputation has only grown over the decades, and The Thing (1951), a science-fiction drama coproduced with Howard Hawks's Winchester Pictures. In 1952, RKO put out two films directed by Fritz Lang, Rancho Notorious and Clash by Night. The latter was a project of the renowned Jerry Wald–Norman Krasna production team, lured by Hughes from Warner Bros. with great fanfare in August 1950. The company also began a close working relationship with Ida Lupino. She would star in two memorable suspense films with Robert Ryan—Nicholas Ray's On Dangerous Ground (1952, though shooting had been completed two years earlier) and Beware, My Lovely (1952), a coproduction between RKO and Lupino's company, The Filmakers. Of more historic note, Lupino was Hollywood's only female director during the period; of the five pictures The Filmakers made with RKO, Lupino directed three, including her now celebrated The Hitch-Hiker (1953). Exposing many moviegoers to Asian cinema for the first time, RKO distributed Akira Kurosawa's epochal Rashomon in the United States, sixteen months after its original 1950 Japanese release.

In September 1952, Hughes and his corporate president, Ned E. Depinet, sold their RKO studio stock to a Chicago-based syndicate with no experience in the movie business; the syndicate's chaotic reign lasted until February 1953, when the stock and control were reacquired by Hughes.[57] During the turmoil, Samuel Goldwyn ended his 11-year-long distribution deal with RKO. Wald and Krasna escaped their contracts and the studio as well. The deal that brought the team to RKO had called for them to produce sixty features over five years; in just shy of half that time, they succeeded in making four.[58] The studio had a poor year financially in 1952, and production had again virtually ground to a halt over the winter. The Encino backlot shut down permanently in 1953 and the property was sold off.[59] Hughes soon found himself the target of no less than five separate lawsuits filed by minority shareholders in RKO, accusing him of malfeasance in his dealings with the Chicago group and a wide array of acts of mismanagement. "RKO's contract list is down to three actors and 127 lawyers", quipped Dick Powell.[60]

Looking to forestall the impending legal imbroglio, in early 1954 Hughes offered to buy out all of RKO's other stockholders. Convinced that the studio was sinking, Walt Disney ended his arrangement with RKO and set up his own distribution firm, Buena Vista Pictures. By the end of the year, at a cost of $23.5 million, Hughes had gained near-total control of RKO Pictures, becoming the first virtual sole owner of a studio since Hollywood's pioneer days. Virtual, but not quite actual. Floyd Odlum reemerged to block Hughes from acquiring the 95 percent ownership of RKO stock he needed to write off the company's losses against his earnings elsewhere. Hughes had reneged on his promise to give Odlum first option on buying the RKO theater chain when he divested it and was now paying the price.[61] With negotiations between the two at a stalemate, in July 1955, Hughes turned around and sold RKO to the General Tire and Rubber Company for $25 million. Hughes retained the rights to pictures he had personally produced, including those made at RKO; he also kept the contract of his discovery Jane Russell. For Hughes, this was the effective end of a quarter-century's involvement in the movie business. Historian Betty Lasky describes Hughes's relationship with RKO as a "systematic seven-year rape."