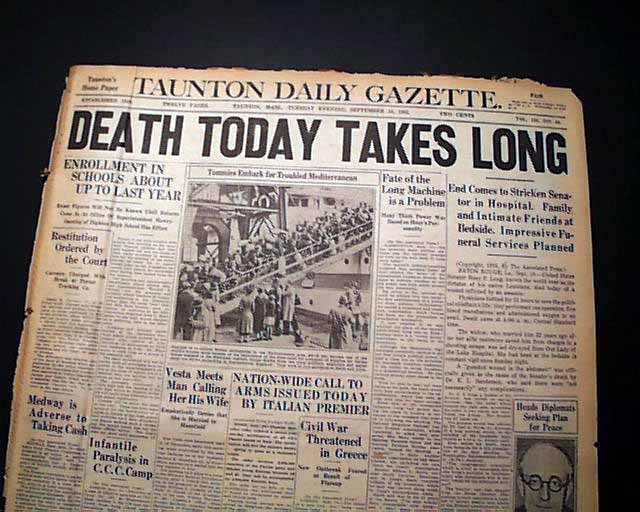 This 12 page newspaper has a nice banner headline on the front page: "DEATH TODAY TAKES LONG" with subhead. (see).
Light browning with some margin wear but no text loss, otherwise good. Should be handled with care.

source: wikipedia: Huey Pierce Long, Jr. (August 30, 1893 – September 10, 1935), nicknamed The Kingfish, was an American politician from the U.S. state of Louisiana. A Democrat, he was noted for his radical populist policies. He served as Governor of Louisiana from 1928 to 1932 and as a U.S. senator from 1932 to 1935. Though a backer of Franklin D. Roosevelt in the 1932 presidential election, Long split with Roosevelt in June 1933 and allegedly planned to mount his own presidential bid.
Long created the Share Our Wealth program in 1934, with the motto "Every Man a King," proposing new wealth redistribution measures in the form of a net asset tax on large corporations and individuals of great wealth to curb the poverty and crime resulting from the Great Depression. He was an ardent critic of the Federal Reserve System.
Charismatic and immensely popular for his social reform programs and willingness to take forceful action, Long was accused by his opponents of dictatorial tendencies for his near-total control of the state government. At the height of his popularity, the colorful and flamboyant Long was shot on September 8, 1935, at the Louisiana State Capitol in Baton Rouge; he died two days later at the age of 42. His last words were reportedly, "God, don't let me die. I have so much left to do."