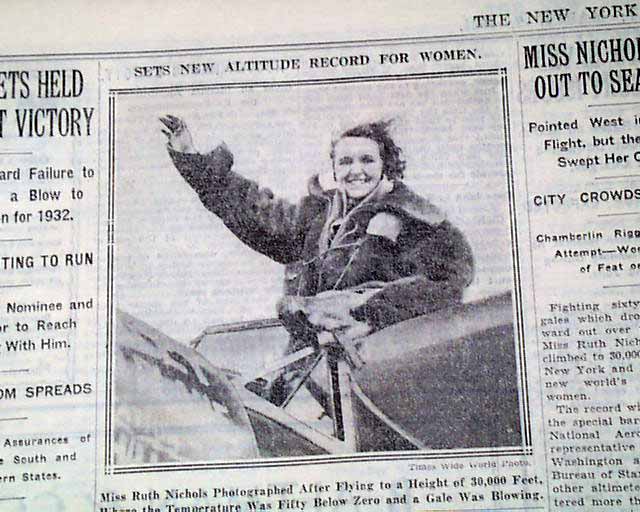 * RUTH NICHOLS SOARS SIX MILES ABOVE CITY, SETTING NEW RECORD
* Unofficial Mark of 30,000 Feet Reached in Gale With Temperature 50 Below Zero
* She Tells Her Own Story

and more. Other news of the day. Rag edition in great condition.

wikipedia notes: While a student at Wellesley College, Nichols secretly took flying lessons. Shortly after graduation, she received her pilot's license, and became the first woman in the world to obtain a hydroplane license. She first achieved public fame in January 1928, as co-pilot for Harry Rogers, who had been her flying instructor, on the first non-stop flight from New York to Miami, Florida. Due to her socialite upbringing and aristocratic family background, Nichols became known in the press as the "Flying Debutante", a name she hated[1]. Nichols was then hired as a sales manager for Fairchild Aviation Corporation. In 1929, she was a founding member, with Amelia Earhart and others, of the Ninety-Nines, an organization of licensed women pilots.

On 21 October 1935, Nichols was critically injured in a crash during a barnstorming flight in Troy, New York. She was unable to fly for nearly a year after. When she returned to flying, Nichols went to work for the Emergency Peace Campaign, a Quaker organization that sought to promote peaceful resolution to international conflicts then brewing. In 1939, she headed Relief Wings, a civilian air service that performed emergency relief flights and assisted the Civil Air Patrol during World War II; Nichols became a lieutenant colonel in the Civil Air Patrol.

Following the war, Nichols became involved in other humanitarian efforts, using her celebrity to bring attention to causes and to raise funds. She organised a mission of support for UNICEF, including piloting a round-the-world tour in 1949. In the 1950s, she served as director of women's activities for the Save the Children Federation, director of the women's division of the United Hospital Fund, and field director for the National Nephrosis Foundation.

During the course of her career, Nichols flew every type of aircraft developed, including the dirigible, glider, autogyro, seaplanes, biplanes, triplanes, transport aircraft, and a supersonic jet. In 1958, after lobbying the United States Air Force for permission, she co-piloted a TF-102A Delta Dagger and reached 1,000 miles per hour (1600 km/h) and an altitude of 51,000 feet (15 545 m), setting new women's speed and altitude records at age fifty-seven.

In 1959, as [NASA]'s Mercury program was preparing for missions to the moon, Nichols underwent the same isolation, centrifuge, and weightlessness tests that had been devised for the astronaut candidates. The tests were conducted at the Wright Air Development Center in Dayton, Ohio, by Brigadier General (Air Force) Donald Flickinger. Flickinger, and his mentor Randy Lovelace (the bioastronautics pioneer who performed the medical selection of the Mercury Seven), had a far-reaching interest in research on the suitability of women as astronauts. However, no official records of the Air Research and Development Command, the experimental wing of the Air Force trying to get America into space, survive to document how or why this came about.

Nichols performed well on the tests, and urged Air Force scientists to include women in their spaceflight plans. The scientists at Wright "thought of this with horror, and they said under no circumstances," according to an oral historian to whom Nichols relayed the story. The test results were leaked to the media which, according to Flickinger, "turned the tide" against Air Force sponsorship of research into female astronaut candidates[2].

Suffering from severe depression in 1960, she died of an overdose of barbiturates at her home in New York City. Her mortal remains are interred at the The Woodlawn Cemetery in the Bronx, New York[3]

Ruth Nichols was inducted into the National Aviation Hall of Fame posthumously, in 1992. A propeller from her 1930s Lockheed Vega is displayed in the National Air and Space Museum's Golden Age of Flight gallery.