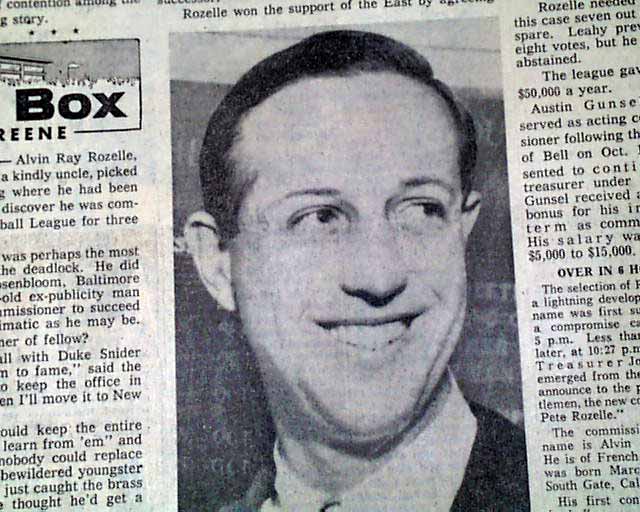 This 40+ page newspaper has a six column headline on the front page of the sport's section (inside): "How NFL Broke Czar Deadlock" with caption: "ROZELLE, RAMS' GENERAL MANAGER, GIVEN 3-YEAR, $50,000 PACT" and photo of Rozelle.
Other news of the day throughout. Some small binding holes along the spine, otherwise good.

wikipedia notes: After Bert Bell's death in 1959, Rozelle was the surprise choice for his replacement as NFL commissioner. According to Howard Cosell in his book I Never Played the Game, the owners took 23 ballots before settling on Rozelle as NFL Commissioner at a January 26, 1960 meeting. When he took office there were twelve teams in the NFL playing a twelve game schedule to frequently half-empty stadiums, and only several teams had television contracts. By the time of Rozelle's resignation, the number of teams had grown to 28, and team owners presided over sizable revenues from U.S. broadcasting networks. The NFL in 1960 was following a business model that had evolved from the 1930s. Following the lead of the rival American Football League, Rozelle negotiated large television contracts to broadcast every NFL game played each season. In doing so, Rozelle not only deftly played one television network against the other, but also persuaded NFL team owners — most notably Carroll Rosenbloom of the Baltimore Colts, and George Preston Marshall of the Washington Redskins — to agree to share revenues between teams, as the American Football League (AFL) had done since its inception. His business model, which emulated that of the AFL, was essentially a cartel that benefited all teams equally, from revenue sharing to the player draft.