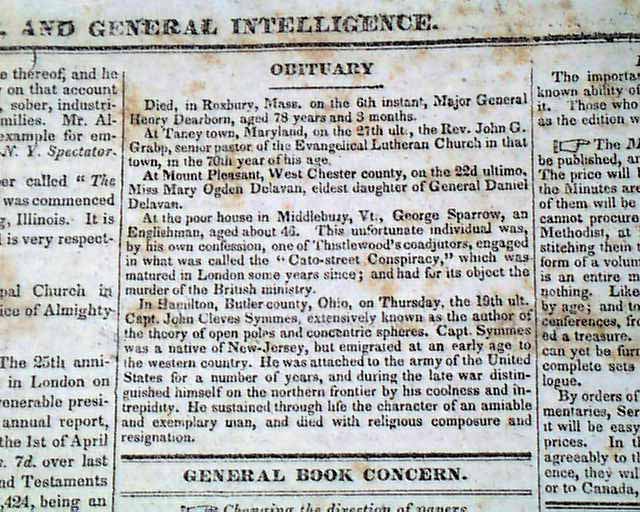 On page 3 in the "Obituary" section is one that reads: "In Hamilton, Butler county, Ohio, the 19th ult. Capt. John Cleves Symmes, extensively known as the author of the theory of open poles and concentric spheres..." & more.

News of the day, mostly religious. Some lite foxing, otherwise in nice condition.

wikipedia notes: John Cleves Symmes, Jr. (1779 – May 1829) was born in New Jersey to Timothy Symmes. In some local dealings he used the name Junior to distinguish himself from his prominent uncle John Cleves Symmes. His cousin, Anna Harrison briefly served as First Lady of the United States. He died in May 1829 and is buried in Symmes Park at Hamilton, Ohio. His son, Americus Symmes, erected a Hollow Earth monument above his grave.

He joined the United States Army in 1802 and rose to the rank of Captain during the War of 1812. He was stationed along the Canadian frontier, at both Fort Niagara and Fort Eire.

Some have claimed he was the real author of: Symzonia; Voyage of Discovery, ISBN 0-405-06312-1, which was attributed to "Captain Adam Seaborn". A recent reprint gives him as the author. Other researchers argue against this idea. Some think it was written as a satire of Symmes ideas, and believe they identified the author as an early American author named Nathaniel Ames who wrote other works, including one that might have served as the inspiration of Moby Dick. (see Lang, Hans-Joachim and Benjamin Lease. "The Authorship of Symzonia: The Case for Nathanial Ames" New England Quarterly, June 1975, pg 241-252.)

Symmes himself never wrote a book of his ideas, as he was too busy expounding them on the lecture circuit, but others did. His follower James McBride wrote Symmes' Theory of Concentric Spheres in 1826. Another follower, Jeremiah N. Reynolds apparently had an article that was published as a separate booklet in 1827: Remarks of Symmes' Theory Which Appeared in the American Quarterly Review. In 1868 a professor W.F. Lyons published The Hollow Globe which put forth a Symmes-like Hollow Earth theory, but didn't mention Symmes. Symmes's son Americus then published The Symmes' Theory of Concentric Spheres to set the record straight.