Home > Back to Search Results > John McGraw death in 1934...
Click image to enlarge 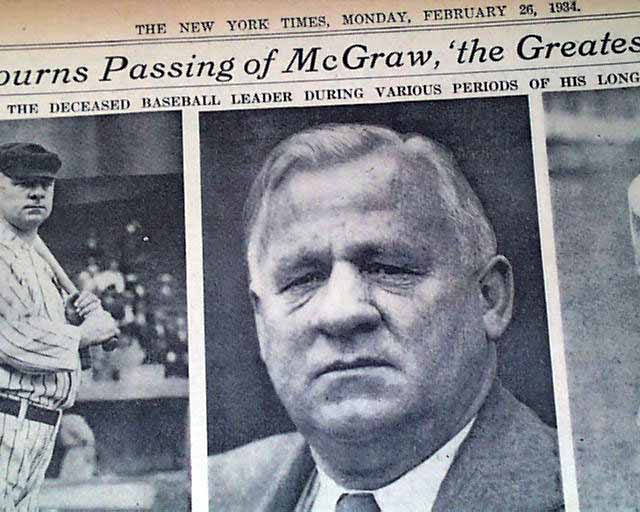 Much more on page 23 with nice banner headline and related photos. Great to have in this title.

Other news of the day throughout. Usual browning with some margin wear, otherwise in good condition.

source: wikipedia: John Joseph McGraw (April 7, 1873–February 25, 1934), nicknamed "Little Napoleon" and "Muggsy", was a Major League Baseball player and manager. His total of 2,763 victories as a manager ranks second overall behind only Connie Mack; he still holds the National League record with 2,669 wins in the senior circuit.

Despite these successes as a player, McGraw is most remembered for his tremendous accomplishments as a manager. Over 33 years as a manager with the Baltimore Orioles of both leagues (1899 NL, 1901–1902 AL) and New York Giants (1902–1932), McGraw compiled 2,763 wins and 1,948 losses for a .586 winning percentage. His teams won 10 National League pennants, 3 World Series championships and had 11 second place finishes while posting only two losing records. In 1918 he broke Fred Clarke's major league record of 1670 career victories. McGraw led the Giants to first place each year from 1921-1924, becoming the only National League manager to win four consecutive pennants. McGraw is second all time with a total of 131 total ejections (at least 14 of these came as a player). Bobby Cox set the record as the Atlanta Braves manager on August 14, 2007.

In 1919, McGraw became a part-owner of the Giants when Charles Stoneham bought the club, becoming vice president and general manager as well as field manager--giving him total control over the baseball side of the Giants operation. He retired as manager midway through the 1932 season. Although McGraw played before numbers were worn on jerseys, the Giants honor him along with their retired numbers at AT&T Park.

McGraw died of an internal hemorrhage in New Rochelle, New York at age 60. Connie Mack would surpass McGraw's major league victory total just months later. After his death his wife found, among his personal belongings, a list of all of the African-American players he wanted to sign over the years, but was unable to.

McGraw was inducted into the Baseball Hall of Fame in 1937; his plaque stated that he was considered the greatest assessor of baseball talent. In honor of his playing days at the school, St. Bonaventure University named its athletic fields after McGraw and his teammate and fellow Hall of Famer Hugh Jennings.