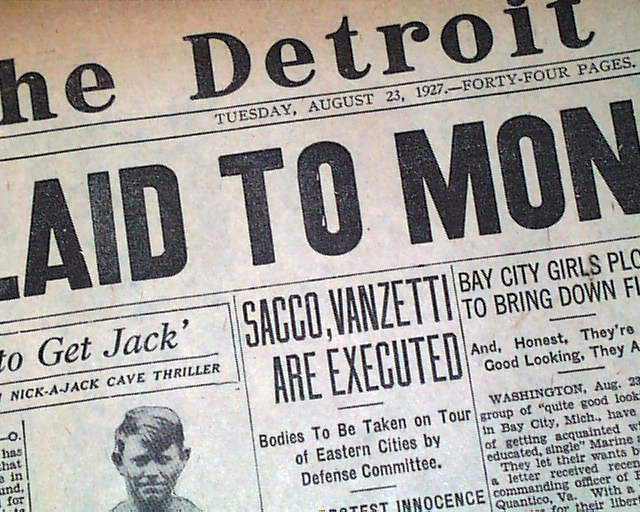 * Nicola Sacco and Bartolomeo Vanzetti executed by the electric chair

This 44 page newspaper has one column headlines on the front page: "SACCO, VANZETTI ARE EXECUTED", "Bodies To Be Taken on Tour of Eastern Cities by Defense Committee", "Both Protest Innocence", with supporting text.

Other news of the day throughout. Usual browning with some binding holes along the 1st column (unrelated to key text) and minor margin wear, otherwise good (see images).

wikipedia notes: Nicola Sacco (real name: Fernando) (April 22, 1891August 23, 1927) and Bartolomeo Vanzetti (June 11, 1888August 23, 1927) were two Italian-born American anarchists, who were arrested, tried, and executed via electrocution in the Americanstate of Massachusetts. There is much controversy regarding their guilt, stirred in part by Upton Sinclair's 1928 novel Boston. Critics of the trial have accused the prosecution and trial judge of allowing anti-Italianism, anti-immigrant, and anti-anarchist sentiment to influence the jury's verdict.