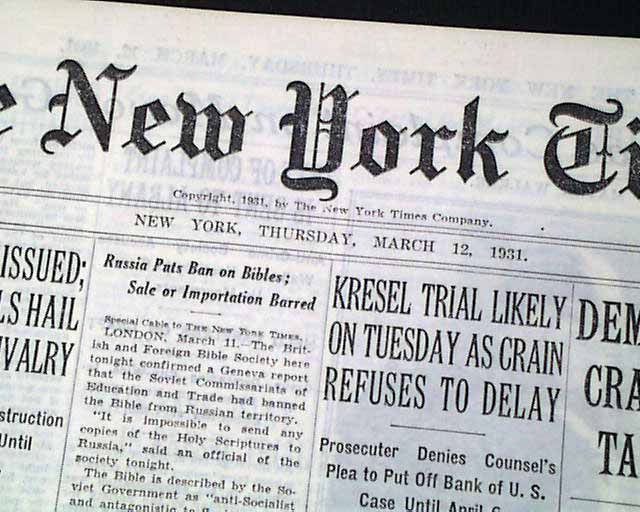 This 52 page newspaper has one column headlines on page 5: "HOOVER DAM JOB LET AT $48,890,999" and "Wilbur Accepts the Six Companies' Offer for Construction of Boulder Canyon Project".

Other news of the day through out. Rag edition in great condition.

wikipedia notes: The contract to make the Boulder Dam was awarded to Six Companies, Inc. on March 11, 1931,[5] a joint venture of Morrison-Knudsen Company of Boise, Idaho; Utah Construction Company of Ogden, Utah; Pacific Bridge Company of Portland, Oregon; Henry J. Kaiser & W. A. Bechtel Company of Oakland, California; MacDonald & Kahn Ltd. of Los Angeles; and the J.F. Shea Company of Portland, Oregon. The chief executive of Six Companies, Frank Crowe, had previously invented many of the techniques used to build the dam.

During the concrete-pouring and curing portion of construction, it was necessary to circulate refrigerated water through tubes in the concrete. This was to remove the heat generated by the chemical reactions that solidify the concrete, since the setting and curing of the concrete was calculated to take about 125 years. Six Companies, Inc., did much of this work, but it discovered that such a large refrigeration project was beyond its expertise. Hence, the Union Carbide Corporation was contracted to assist with the refrigeration needs.

Six Companies, Inc. was contracted to build a new town called Boulder City for workers, but the construction schedule for the dam was accelerated in order to create more jobs in response to the onset of the Great Depression, and the town was not ready when the first dam workers arrived at the site in early 1931. During the first summer of construction, workers and their families were housed in temporary camps like Ragtown while work on the town progressed. Discontent with Ragtown and dangerous working conditions at the dam site led to a strike on August 8, 1931. Six Companies responded by sending in strike-breakers with guns and clubs, and the strike was soon quelled. But the discontent prompted the authorities to speed up the construction of Boulder City, and by the spring of 1932 Ragtown had been deserted.[6] Gambling, drinking alcohol, and prostitution were not permitted in Boulder City during the period of construction. To this day Boulder City is the only location in Nevada not to allow gambling[citation needed], and the sale of alcohol was illegal until 1969.

While working in the tunnels, many workers suffered from the carbon monoxide generated by the machinery there. The contractors claimed that the sickness was pneumonia and was not their responsibility. Some of the workers sickened and died because of the so-called "pneumonia". Most are uncounted on the official death list. In a court case, one of the claimants (Ed Kraus) said that the poisoning had resulted in his impotence. This was disproved after a prostitute in the pay of the contractors gave evidence. The jury failed to reach a verdict as a result, and the claim was lost