Home > Back to Search Results > Princess Margaret does not marry Peter Townsend...
Click image to enlarge 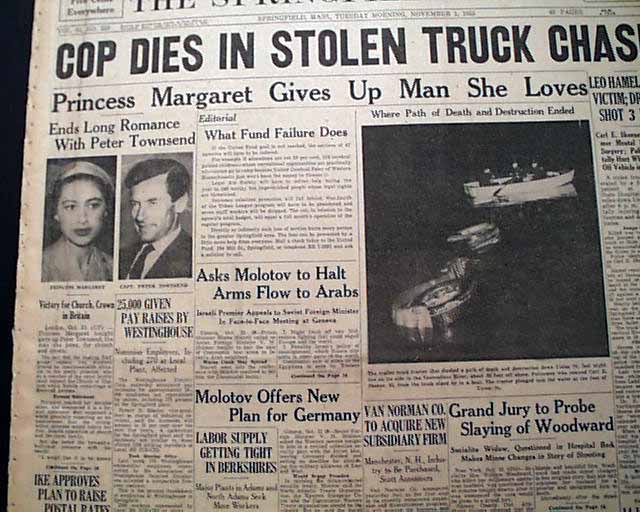 This 40 page newspaper has a seven column headline on the front page: "Princess Margaret Gives Up Man She Loves" with subhead: "Ends Long Romance With Peter Townsend' and related photos.

wikipedia notes: Two years after her sister's coronation, Margaret became embroiled in a public scandal over her wish to marry Group Captain Peter Townsend, a Royal Air Force pilot and Battle of Britain hero who had been a trusted member of the Royal Household as an equerry to her father and sister. Not only was he sixteen years the Princess's senior, Townsend was also a divorcee, which, in the eyes of the government and the Church of England, made him an unsuitable husband for a Royal Princess, despite the fact that he had been the innocent party in his divorce from Rosemary Pawle, who had committed adultery.

Although Margaret could have married Townsend with Parliamentary approval once she turned 25, she was informed that doing so would force her to give up her title, her Civil List allowance, and her place in the line of succession. It was also suggested, entirely incorrectly, that she would be forced to leave the country[citation needed]. Under great pressure, not least because her role as a royal princess was virtually the only identity she had, and taking advice from the Archbishop of Canterbury and senior politicians, she decided not to marry Townsend. She made a public announcement, reportedly partly crafted by Townsend himself, in which she stated that her decision had been made out of loyalty to the Crown and out of consciousness of the Church's teaching on the "indissolubility of Christian marriage".

In reality, however, papers released in 2004 indicate that, had she married Townsend, she could not have been legally deprived of her title or her Civil List allowance. Had she decided to marry Townsend, the only conditions were that she would be removed from the line of succession and that any wedding would have to be civil rather than religious.[3] Margaret and her sister had been misled by courtiers and politicians who were either still deeply fearful of potential marital scandal 20 years after the abdication of Edward VIII or simply determined to maintain the status quo, regardless of the personal and emotional effects.