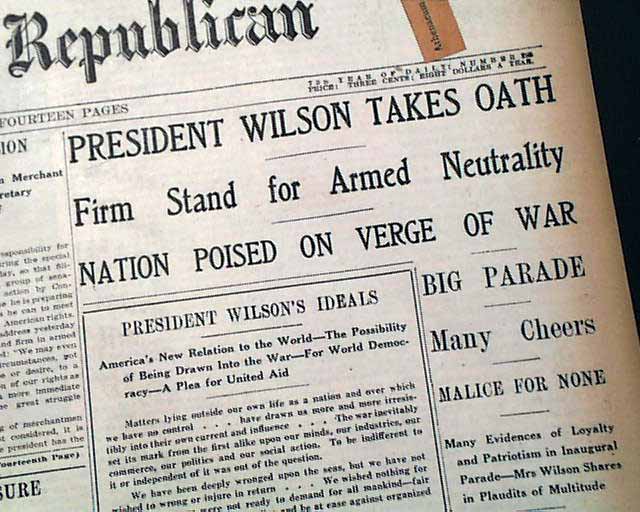 source: wikipedia: Thomas Woodrow Wilson (December 28, 1856—February 3, 1924),[1] was the twenty-eighth President of the United States. A leading intellectual of the Progressive Era, he served as President of Princeton University and then became the Governor of New Jersey in 1910. With Theodore Roosevelt and William Howard Taft dividing the Republican Party vote, Wilson was elected President as a Democrat in 1912. He proved highly successful in leading a Democratic Congress to pass major legislation that included the Federal Trade Commission, the Clayton Antitrust Act, the Underwood Tariff, the Federal Farm Loan Act and most notably the Federal Reserve System. [2][3]

Narrowly re-elected in 1916, his second term centered on World War I. He tried to maintain U.S. neutrality, but when the German Empire began unrestricted submarine warfare, he wrote several admonishing notes to Germany, and in April 1917 asked Congress to declare war on the Central Powers. He focused on diplomacy and financial considerations, leaving the waging of the war primarily in the hands of the military establishment. On the home front, he began the first effective draft in 1917, raised billions in war funding through Liberty Bonds, imposed an income tax, enacted the first federal drug prohibition, set up the War Industries Board, promoted labor union growth, supervised agriculture and food production through the Lever Act, took over control of the railroads, and suppressed anti-war movements. He paid surprisingly little attention to military affairs, but provided the funding and food supplies that helped the Americans in the war and hastened Allied victory in 1918.

In the late stages of the war, Wilson took personal control of negotiations with Germany, including the armistice. He issued his Fourteen Points, his view of a post-war world that could avoid another terrible conflict. He was the first President to leave the United States while still in office, going to Paris in 1919 to create the League of Nations and shape the Treaty of Versailles, with special attention on creating new nations out of defunct empires. Largely for his efforts to form the League, he was awarded the Nobel Peace Prize in 1919. Wilson collapsed with a debilitating stroke in 1919, as the home front saw massive strikes and race riots, and wartime prosperity turn into postwar depression. He refused to compromise with the Republicans who controlled Congress after 1918, effectively destroying any chance for ratification of the Versailles Treaty. The League of Nations was established anyway, but the United States never joined. Wilson's idealistic internationalism, calling for the United States to enter the world arena to fight for democracy, progressiveness, and liberalism, has been a highly controversial position in American foreign policy, serving as a model for "idealists" to emulate or "realists" to reject for the following century.