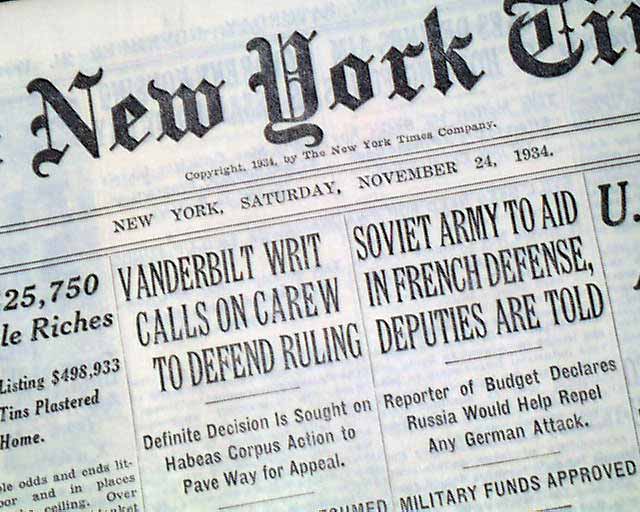 This 32 page newspaper has one column headlines on the front page that include: "VANDERBILT WRIT CALLS ON CAREW TO DEFEND RULING" with subheads: "Definite Decision is Sought on Habeas Corpus Action to Pave Way for Appeals" "Guardian Fight Resumed" and more.

This coverage is concerning the Gloria Vanderbilt custody trial which was one of the national sensations of the day.

Young Gloria became heiress to a four million dollar trust fund upon her father's death. The rights to control this trust fund while Vanderbilt was a minor belonged to her mother, also named Gloria. As a result of frequent spending her finances were scrutinized by young Gloria's paternal aunt,Gertrude Vanderbilt Whitney.  Mrs. Whitney wanted custody of the young heiress and soon a famous and scandalous trial became the lead story in 1934. The trial was so scandalous that at times the judge would make everyone leave the room to listen to what ten year-old Gloria had to say with nobody signaling her. The widow Vanderbilt lost the battle and the younger Gloria became the ward of her Aunt Gertrude.

This is a "rag edition" issue, meaning printed on very high quality newsprint mean for long-term storage by libraries and other institutions. Very nice condition.