Home > Back to Search Results > One of the earliest Pennsylvania newspapers...
Click image to enlarge 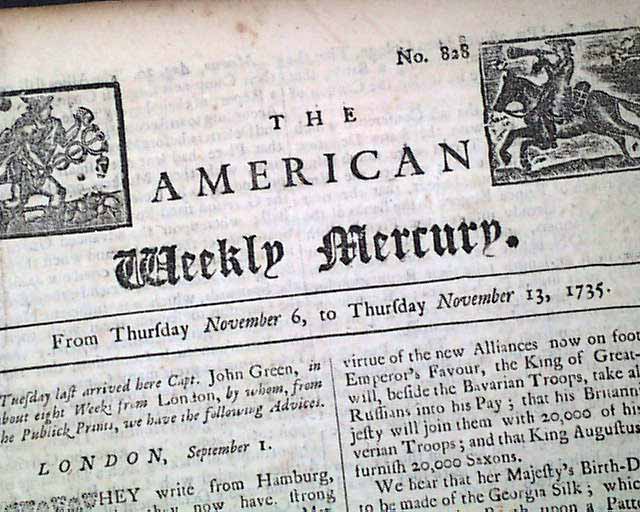 THE AMERICAN WEEKLY MERCURY, Philadelphia, Pennsylvania, November 13, 1735  As any serious collector of newspapers knows, it is exceedingly difficult to find any colonial American newspapers from before 1760, let alone an issue from 1735.
This is a great issue from the premier city of the colonies at that time--when Ben Franklin was just beginning his career--and a handsome issue as well, as the masthead features two wood engravings, one showing a newsboy on horseback "trumpeting" the news. The front page is taken up with reports from London including military affairs in Europe. Reports from Europe carry over to page 2 while page 3 has reports from "Boston". One item mentions the celebration of the 53rd birthday of King George II. Various other items as well.
The back page is taken up with various advertisements, including two illustrated ship ads and an illustrated ad for a Bible (see). The imprint appears at the bottom of the back page: "Philadelphia: Printed and Sold by Andrew Bradford, Post-Master...". The Bradford family published newspapers in various towns during the colonial period.
Professionally rejoined at the spine, in great condition, measures 7 1/2 by 11 3/4 inches.