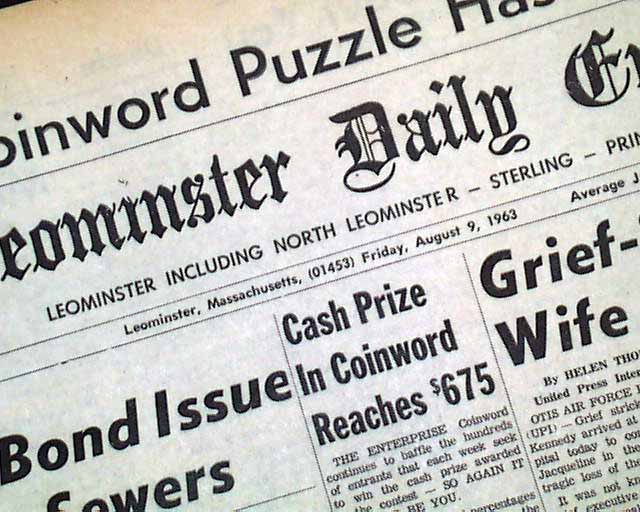 This 10 page newspaper has a one column headline on the front page:

* Train Robbery Losses Soar to $7,005,000
.
Other news of the day throughout. Binding holes along the spine, slightly browned, otherwise in good condition.

source: wikipedia: The Royal Mail Glasgow to London travelling post office (TPO) train was stopped by a red light at Sears Crossing. The signals had been tampered with, unknown to the driver, with a glove placed over the green light and a six-volt battery temporarily powering the red one. The co-driver David Whitby went to call the signalman only to find the telephone cables had been cut. Upon returning to the train, he was thrown down the embankment of the railway track.[2]

One problem the robbers encountered was that the diesel train was different from the local trains, making it difficult to operate. One of the robbers had spent months befriending railway staff and familiarising himself with the layout and operation. It was then that Ronnie Biggs decided the driver, Jack Mills, would remain with them. The high-value carriage was decoupled from the others and driven a further half a mile to Bridego Bridge where the robbers' Land Rovers lay in wait.

A 15-member gang, led by Bruce Reynolds and including Biggs, Charlie Wilson, Jimmy Hussey, Roy James, John Wheater, Brian Field, Jimmy White, Tommy Wisbey, Gordon Goody and Buster Edwards, one of whom was an ex-British Army paratrooper, boarded the train and began to unload the money sacks into waiting vehicles on the road below the bridge. Although no guns were used, the train driver was hit on the head with an iron bar, causing a black eye and facial bruising - and later very considerable health problems, which may have also been psychological. The assailant was one of two members of the gang who was never identified. Frank Williams (at the time a Detective Inspector) claims to have traced the man, but he could not be charged because of lack of evidence. Mills recovered but had constant trauma headaches the rest of his life. He died in 1970 from non-associated leukemia.