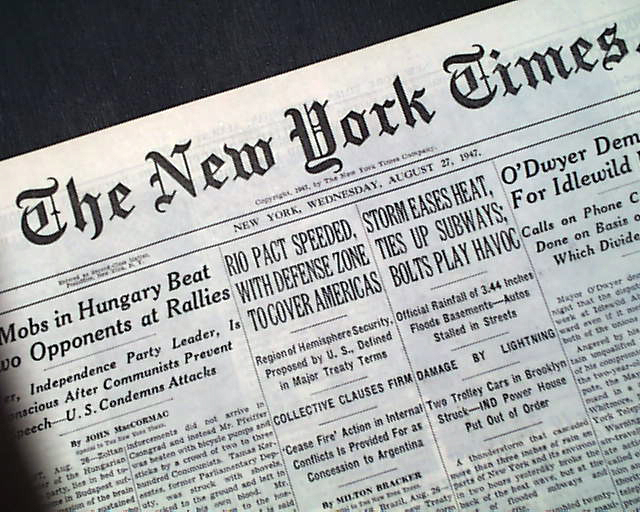 
THE NEW YORK TIMES, August 27, 1947  This 46 page newspaper has a five column headline on page 27: "Pirates Rout Dodgers on 20-Hit Attack," with subheads that includes: "Bankhead Hits Home Run" "But Negro Pitcher Is Routed With Gregg--Ostermueller Triumphs on Mound," and more with related photos, one showing Bankhead crossing home plate after home run. Box scores as well.
Other news of the day throughout. Rag edition in great condition.

source: wikipedia: Dan Bankhead (born May 3, 1920 in Empire, Alabama - May 2, 1976), was the first black pitcher in Major League Baseball. After a strong career in the Negro League playing for the Memphis Red Sox, he was signed at age 24 by Branch Rickey to play for the Brooklyn Dodgers. Bankhead, an excellent hitter who was leading the Negro League with a .385 batting average when purchased by the Dodgers, hit a home run in his first major league at bat on August 26, 1947 in Ebbets Field against the Pittsburgh Pirates. But, indicative of his future career on the mound, Bankhead gave up 10 hits in 3-1/3 innings pitching in relief. He was shipped to the minor leagues for the 1948 and 1949 seasons. Pitching for minor league clubs in Nashua, New Hampshire and St. Paul, Minnesota in 1948, he recorded 24 wins and 6 losses.

He returned to the Dodgers for the 1950 season and recorded 9 wins and 4 losses with a 5.50 earned run average. In 1951, his final year in the league, he appeared in only 7 games and recorded a record of 0 wins and 1 loss with an earned run average of 15.43. He died of cancer at a Veterans Administration hospital in Houston, Texas. During World War II, he served in the Marine Corps from 1942 to 1945.