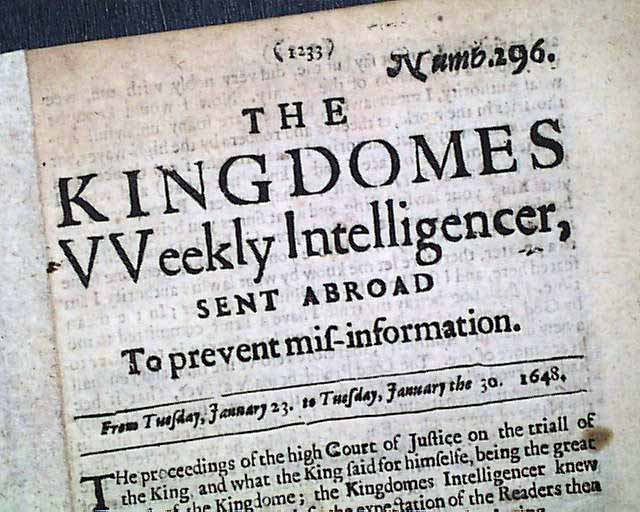 This is an early "newsbook", the predecessor of today's newspapers. This issue was published 17 years before the beginning of the London Gazette, the oldest continually published newspaper in the world which began in 1665.

This is an extremely significant issue as all text is devoted exclusively to the trial and sentence of King Charles I.

Charles I was the first British monarch to be put on trial for treason which would lead to his execution. This event is one of the most famous in Stuart England's history, and one of the most controversial. No law could be found in all England’s history that dealt with the trial of a monarch so the order setting up the court that was to try Charles was written by a Dutch lawyer called Issac Dorislaus and he based his work on an ancient Roman law which stated that a military body (in this case the government) could legally overthrow a tyrant. The execution of Charles lead to an eleven year gap in the rule of the Stuarts (1649 to 1660) and it witnessed the rise to supreme power of Oliver Cromwell.

Charles was put on trial in London on January 1st 1649. He was accused of being a "tyrant, traitor and murderer; and a public and implacable enemy to the Commonwealth of England."

He was to be tried by 135 judges who would decide if he was guilty or not. In fact only 68 turned up for the trial. Those that did not were less than happy about being associated with the trial of the king. This Parliament was known as the "Rump Parliament" and of the 46 men allowed in (who were considered to be supporters of Cromwell), only 26 voted to try the king. Therefore even among those MP's considered loyal to Cromwell, there was no clear support to try Charles.

At the trial, Charles refused to defend himself. He did not recognize the legality of the court. He also refused to take off his hat as a sign of respect to the judges who did attend. This seemed to confirm in the minds of the judges that Charles, even when he was on trial for his life, remained arrogant and therefore a danger to others as he could not recognize his own faults.

Bradshaw announced the judgment of the court : that
"he, the said Charles Stuart, as a tyrant, traitor, murderer and public enemy to the good of this nation, shall be put to death by severing of his head from his body." (see photos for this actual quote in the newsbook)
His date of execution was set for January 30th 1649, the same date of this issue.

All text on all 8 pages appear in the photos. The issue measures 5 3/4 by 7 1/2 inches. There is archival strengthening tape at the spine of the front & back pages. The issue is nicely inked and in nice condition as can be seen in the photos.