Home > Back to Search Results > Joe Tinker is dead...
Click image to enlarge 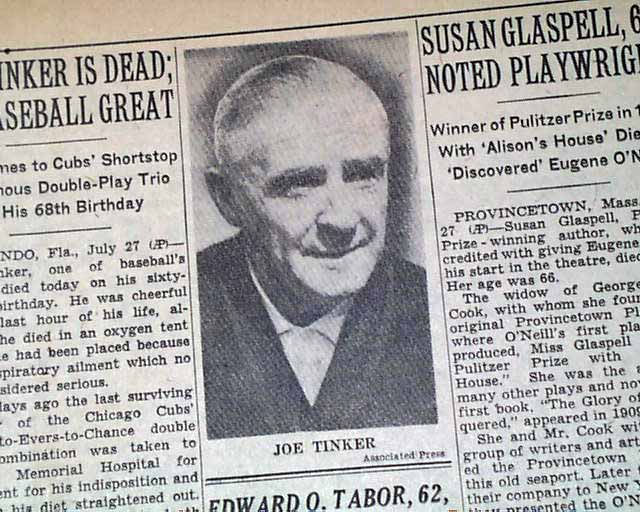 
NEW YORK TIMES, July 28, 1948This 48 page newspaper has one column headlines on page 23 that include: "JOE TINKER IS DEAD; A BASEBALL GREAT" "End Comes to Cubs' Shortstop in Famous Double-Play Trio on His 68th Birthday" with smaller subheads and one column photo of Joe Tinker.
Other news of the day throughout. Some margin browning and little wear, otherwise in good condition.

For most of his career he played for the Chicago Cubs, starting as a 21-year-old rookie in 1902. Tinker was an average hitter, despite usually hitting well against pitcher Christy Mathewson, but a speedy runner, stealing an average of 28 bases a season and even stealing home twice in one game on July 28, 1910. The shortstop excelled at fielding, often leading the National League in a number of statistical categories. During his decade with the Cubs, they went to the World Series four times.