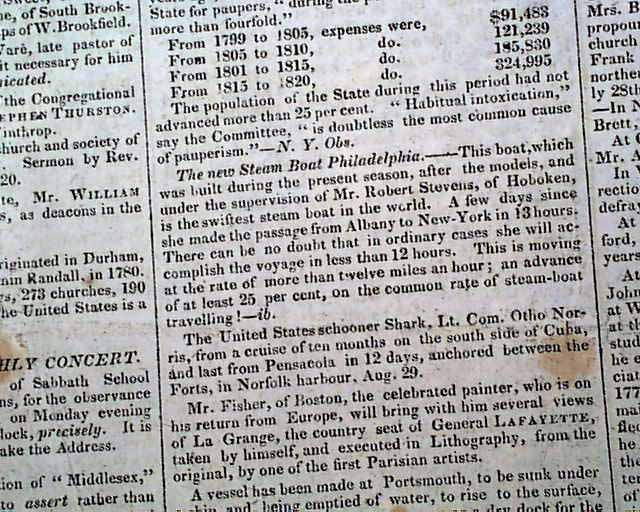 
BOSTON RECORDER AND TELEGRAPH, Boston, Massachusetts, September 8, 1826
* Steamboat Philadelphia - fastest of its kind
* Harvard Commencement - Luther S. Cushing
Page 3 has a notable report: "The new Steam Boat Philadelphia.--This boat, which was built during the present season...under the supervision of Mr. Robert Stevens, of Hoboken, is the swiftest steam boat in the world. A few days since she made the passage from Albany to New-York in 13 hours. There can be no doubt that in ordinary cases she will accomplish the voyage in less than 12 hours. This is moving at the rate of more than twelve miles an hour, an advance of at least 25 per cent, on the common rate of steam-boat traveling. The Stevens family were early steamboat pioneers, they started and operated the famous Hoboken Ferry, and later they founded the Stevens Institute of Technology...".
Other news of the day includes: "Amherst College" "Harvard College", which provides the names of the graduates, including the sole graduate of Harvard's Law School, along with details regarding the commencement. Most articles are of a religious nature.
4 pages in good condition.