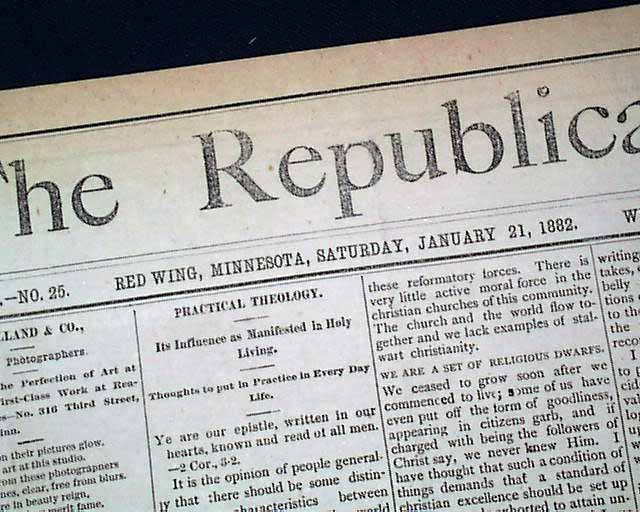 
THE REPUBLICAN, from Red Wing, Minnesota, dated January 21, 1882. This newspaper has news of the day with several interesting advertisements, many which are illustrated.

source: wikipedia: In the early 1850s settlers disembarking from Mississippi River steamboats came to Red Wing to farm the lush fields nearby in Goodhue County. They grew wheat, one annual crop of which could pay off the cost of the land. Before the railroads crisscrossed the new territory, Goodhue County produced more wheat than any other county in the country and in 1873 Red Wing led the country in the amount of wheat sold by farmers.[1] The warehouses in the port of Red Wing could store a million bushels of grain.[1] Once the railroads connected southern Minnesota with Minneapolis and Saint Anthony, where the largest flour mills were built, the port at Red Wing lost its prominence.[1] In last half of the 20th century, the United States Army Corps of Engineers built locks and dams and deepened the channel in the river. These actions reinvigorated river traffic for the shipping of grain and coal, however the river tourist trade has never returned.[1]

The first settlers who stayed in town built small mills, factories, and workshops, similar to the ones they were familiar with in New England where many of them came from.[1] Immigrants from Germany, Ireland, and Sweden were also skilled craftsman. Some early and persistent industries are tanning and shoe-making. Other businessmen made farm equipment, bricks, barrels, boats, furniture, pottery, and buttons. Consumables included beer and lumber. Service industries including stone-cutting, hospitality, and retailing.[1] The Saint James Hotel remains a working token of the earlier time